While I was at the rally in Vancouver yesterday, I saw a booth for No New Normal. They meet at the Vancouver Art Gallery on Sundays. I was there when Antifa came to crash their event last year and got in a physical scuffle with the Antifa leader before they left. I'll never forget the look of shock in his eye when he realized we were willing to physically defend our rights. I just looked at him and thought what were you thinking? That we would run away? We didn't fight a war on foreign soil to bend over for the same tyrants here at home.

So I checked out their blog and see they have many good articles on it. I want to discuss their most recent post about Klaus Schwab because it is very relevant and very misunderstood. The person who wrote it is very intelligent and spent a lot of time investigating the subject. However, I'm going to disagree with a few key points.

The title of the post is Klaus Schwab: The Capitalist Manifesto. It's obvious a spoof on the Communist Manifesto which is highly relevant. I guess that's the Darth Vader outfit the Vlogger Whats her face was talking about. We all agree Klaus Schwab is a bad man. Whether he is a Capitalist or a Communist is up for debate. We can all agree when Capitalists fund Communism they don't do it with a desire to share their wealth. They do it to increase their wealth.

The article states that "Schwab explains Stakeholder Capitalism on the WEF website in a series of articles, the least encouraging is entitled 'The Capitalist Manifesto,' a discordant echo to the Communist Manifesto" so Schwab was the one that came up with the term.

Then the blog post clarifies that in Schwab's article "the only real resemblance to communism is the abolition of private property. And even Marx never suggested that the state should own absolutely everything including human beings. However, Schwab’s sociopathic colleagues want it all. A totalitarian state of inventory and control."

I totally agree that Schwab and his colleagues are sociopaths who want it all. A totalitarian state of inventory and control. However, that's what Communism is. I will agree there are two definitions of Communism. One that is real, the other that is imaginary. One is the idealistic fairy tale they promise, the other is the crushing reality we have historically seen.

When I was with CUPW I had a co worker that thought I was a Communist for the same reason I thought he wasn't. We both believed in democracy and free speech. When he told me that I was puzzled. Communism is the exact opposite of Democracy and Free Speech. Whenever they form a totalitarian state, they call it a Democratic Republic but it is anything but. This is the problem. Communism is always hijacked by Capitalists who turn it into slavery.

Klaus Schwab is a Communist and he is using Corporate Communism to trap the West into his slavery. The blog post states that "It cannot be stressed enough that the Great Reset is NOT communism." Actually that's exactly what it is. Defending Communism is the wrong thing to do.

The blogger is trying to explain Prince Charles' support for the World Economic Forum but they missed one crucial point. After the Communist revolution in Russia, which was funded by the Rothschild's, they executed the Romanovs.

Prince Charles is trying to secure a place for himself within the New World Order only there is no place for him there. They will kill him just like they killed the Romanovs. Charles is being conned just like the Trade Unionists. There are no trade unions in Communism and in Communism no one has the right to strike. Whether we see Klaus Schwab as a Capitalist or a Communist doesn't matter. What matters is that we agree he is a bad man trying to turn us into slaves.

The World Economic Forum's embracement of Communist China is the red flag waving for the world to see. China does not represent State Capitalism. China represents Communism. Klaus Schwab is using these bullsh*t terms to trick the West into embracing Communism. This is how he's gained control of NATO and the CIA. Klaus Schwab is a bad man. Do the math. 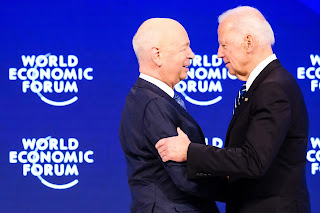