Director of the CIA resigns 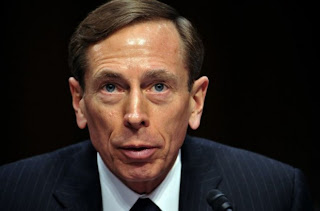 David Petraeus, the retired four-star general who led the U.S. military campaigns in Iraq and Afghanistan, abruptly resigned today as director of the CIA after admitting he had an extramarital affair. "Such behavior is unacceptable, both as a husband and as the leader of an organization such as ours," the retired general said in a statement.

Wow, that’s shocking. That he resigned. Maybe he’s going to make a run for the presidential bid just like Newt Gingrich. Rumors are swirling that the Evil Hilary is stepping down to prepare for her presidential bid when Obama’s second term expires. Isn’t that frightful. I’d vote for John McCain before I’d vote for Hilary Clinton. She was tied to the drug smuggling and money laundering out of Mena, Arkansas along with Mr. Bill.

The thing that bugs me is that Obama goes on about David Petraeus’s extraordinary military service. Let’s see, the unlawful invasion of Iraq based on a lie that incurred trillions of tax dollar debt for war profiteering like Dick Cheney's Halliburton and who knows what else since the Pentagon can’t account for half of what it spends.

Petraeus was also involved with the invasion of Afghanistan reversing the Taliban’s end to opium cultivation there and returning Afghanistan to become the largest opium producing nations in the world. That’s extraordinary alright. Obama’s blind support of the CIA including Operation Fast and Furious is a huge concern. Looks like we just got a better spin doctor.