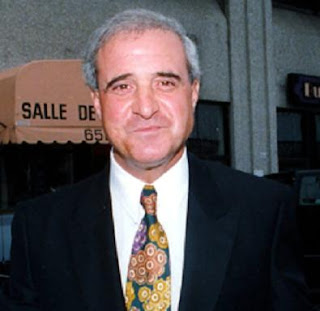 It's all over the news now. Rizzuto advisor, Joe Di Maulo was gunned down Sunday night in Blainville, 50 km northwest of Montreal. He was 70 years old. He is also the brother-in-law of Raynald Desjardins, charged with the 2011 murder of former Bonanno crime family boss Salvatore Montagna.

Di Maulo was of Calabrian origin and was linked to the clan Cotroni and Violi before they were eliminated by the Rizzutos, which he then joined. Former Montreal police investigator Richard Dupuis said Di Maulo might have angered Rizzuto for failing to strike back following the murders of Vito's son Nick Jr. in 2009 and his father, Nick Sr. in 2010.

It’s interesting to note that he is Calabrian and the Calabrians are making a come back with the help of the Hells Angels. I’m going to have to sit down and do the math on this one. He could have been taken out by either side. Either way, shooting a 70 year old man is pretty lame.

Meanwhile, the Montreal mayor steps down amid corruption allegations.