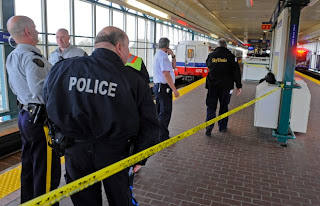 Oddly enough, a "makeshift" bomb was spotted by a passenger on an elevated SkyTrain track in Surrey yesterday afternoon, and later removed and exploded by an RCMP bomb squad. The confirmed bomb threat is believed to be the first ever involving SkyTrain infrastructure.

The bomb was spotted between Gateway and Scott Rd. SkyTrain stations in Surrey at 2:15 p.m. Police found that it was strapped to three empty cylinders. The cylinders, which looked like propane tanks according to police, will be kept for forensic investigation. Three empty cylinders doesn’t sound like a Halloween screecher bomb. Strange. Empty propane cylinders wouldn’t do anything.

“When you looked down on the device you could see what appeared to be some sort of red canister; it looked like possibly a fire extinguisher or an oxygen tank,” transit police spokeswoman Anne Drennan said.