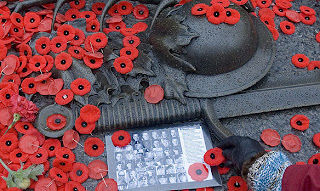 On the 11th hour of the 11th day of the 11th month in 1918 the hostilities of World War I came to an end. In Flanders Fields is a famous poem written by Lieutenant Colonel John McCrae during that war that referred to the poppies that grow in the fields of France where some of the bloodiest battles of the war were fought. As a result, the poppy has come to symbolize remembering the sacrifices made on our behalf in times of war.

The other day the Vancouver Province ran an editorial cartoon of a solemn memorial for all the soldiers who died in war. The picture beside it was a memorial for all the civilians who lost their lives in war. That monument was three times the size. That is indeed tragic. Last year one reader said it was a 10 to 1 ratio of civilians killed in war compared to soldiers. Certainly Hiroshima and Nagasaki were examples of that. Just as the poppy has come to symbolize the sacrifices made in war, the paper crane has come to symbolize the civilian casualties of war. Something we need to remember as we embark on drone wars to kill suspected terrorists and civilians.

Last year on the 11th day of the 11th month of the 11th year I wrote a post about how we’ve gone from the poppies of Flanders fields in France to the opium poppies grown in Afghanistan after the allied invasion. Times have sure changed and it hasn’t been for the better. We have changed the mission and distorted the dream. I’ve been surprised how much traffic that old post is getting this month.

I’m not going to restate the same concerns here but I will expand upon them. WWI and II were pretty clear cut good versus evil. A madman rises to take over the world and the world responds to stop him. It is important to remember the steps Hitler used to con his people and convince them into giving him more power then he ever deserved.

Even Korea and Vietnam, as controversial and unpopular as those wars were, were fighting for a specific cause. It was a stand against a nation who wanted to invade another nation and bring them into bondage. It was still a fight for Freedom. The invasion of Iraq changed all that. It introduced war profiteering and propaganda which resulted in the occupation of foreign land based on a lie. We were tricked in Afghanistan and lost many wonderful sincere soldiers as a result. The loss of life does not make a struggle wrong. Fighting for oil pipelines and control of the opium trade does.

An article in the Vancouver Province recently cited how much money the Harper government is spending on advertizing. A new trend mirrored by the flailing Christy Clark government here in BC. A government starts to sink in the polls and instead of heeding the democratic will of the people, they spend millions on advertizing trying to convince voters why big brother knows best.

Yesterday morning I was awoken by a commercial on my clock radio. It was a Harper attack add on Thomas Mulcair. I found it offensive, obsessive and dishonest. It went on and on about how Mulcair supports a gas tax that could be as high as ten cents a litre and how we can’t afford Thomas Mulcair because he wants to spend huge amounts of tax dollars. It was indeed dishonest, offensive and obsessive. This isn’t even an election. Back in the day we would only hear election ads during an election.

Harper’s obsessive paranoia started off with attack ads against the federal liberal leader Bob Rae after the election. The liberals were wiped off the face of the earth after the election. The criminally dishonest robocalls played a role in that. Spending money on attack ads after a political party were wiped off the map was very obsessive. Now the ongoing attack ads have turned to the leader of the opposition and are inherently dishonest. Stephen Harper’s pal Gordon Campbell was the one who supported a gas tax as well as the HST. The NDP and the provincial conservatives in BC do not. Friday I filled up with gas in Abbotsford. There already is a 9 and a half cents per litre difference in the price of gas in Surrey compared to Abbotsford. That is criminal.

Aside from attack ads after the election is over, we also have these crazy ads the Vancouver Province talks about which are paid for with tax dollars just like the Christy Clark government is doing in BC. Why no wonder. They both have the same Pee Wee Herman advisor. The Clark government went so far as paying for a self promoting commercial during the Super Bowl. Insanity to the extreme.

This is the one day of the year Stephen Harper and Peter McKay should hang their heads in shame and be in hiding because they have betrayed the Canadian military they exploit. As we speak there are law suits and complaints of cuts to funding for soldiers, pensions and support services. Jack Layton would not have done that but Stephen Harper did.

It’s like getting elected on a tough on crime platform then cutting funding for the RCMP and the gang task force while at the same time spending millions on advertizing for the RCMP trademark. This is Stephen Harpers bizarre new world that looks more like a bad acid trip down the rabbit hole with Alice in Wonderland then anything we had hoped for. Millions on insider trading jets that can’t be used in the arctic to protect Canada but nothing for the soldiers or coast guard. Billions on the banks that didn’t need a bail out why we cut pensions and raise the age of retirement. What have we done?

When I was looking through youtube videos of the Pink Floyd’s song Requiem for a post war dream, one had a clip of a sky full of parachutes as a multitude of soldiers descended to a bloody battle for freedom. It’s overwhelming to think about how many soldiers volunteered for that colossal cause. It also showed clips of soldiers killing each other and it made me ask, what makes us different from the enemy?

The first difference was we weren’t invading another country trying to conquer them. We were helping to stop that. The other difference was that we don’t torture our prisoners. Sadly in modern warfare both distinctions have been lost. This is not what our soldiers fought for. This is not the dream they died for. What happened? What happened to the post war dream? Take heed. Take heed of the dream. That’s what makes us different from the enemy. Lest we forget. Lest we forget who we are. Je me souviens. Blessed are the Peacemakers. That is what we used to be. 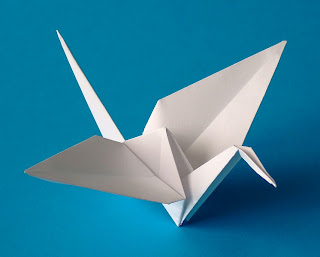 Posted by Dennis Watson at 1:09 AM