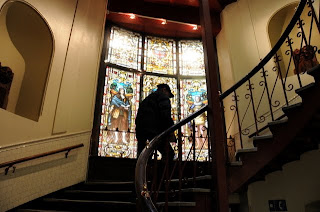 I’m not talking about crushing the homeless. This project includes spaces for low income as well as social housing. So that would mean 97 more low income units than what currently exists in that location. And get this: they are low income units in a nice building not a disgusting slum that is a health hazard like the American hotel were Tony Terezakis was beating the life out of drug addicts who owed him money.

The builder refers to the project as a game changer and I agree. This is what we need. Usually it’s hard to convince business to move into bad areas. Now they are doing it all on their own, they’re included low income housing and we have extremists still complain. They must be the ones selling drugs out of Vandu. Drug dealers oppose the project because it will reduce their business.

Did you know there is some magnificent stained glass at the Carnegie centre? I noticed it one day wading through the drug dealers on East Hastings. It’s low, right about the street level. Turns out on the inside there’s a marble swirling staircase and a magnificent stained glass portrait of Milton, Shakespeare and Spenser. Everyone should be able to see the magnificent history the Carnegie Centre has to offer. Right now all the drug dealers are preventing the general public from seeing it. That isn’t right. The Institute for Stained Glass Canada has documented it on their web site. 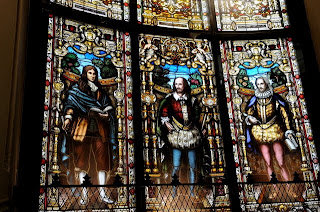