Another Hells Angel charged with murder 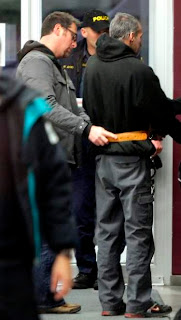 Jeffrey David Peck, a member of the Manitoba Hells Angels since 2002, has been charged with first degree murder along with Robert Simpson. It involves the June 1982 murder of Robert Frank Conroy inside Collin's Bay Institution in Kingston.

Peck is a former president of the now-defunct Los Brovos gang, which eventually morphed into the Hells Angels in 2000. In 2007, Peck pleaded guilty to selling a kilogram of cocaine to an undercover agent as part of a police sting operation. He was sentenced to 71/2 years in prison.

There are concerns within organized crime that a source, or sources, are working with police and may be spilling the beans on other unsolved crimes. "There will be a lot of people wondering what else might be coming," a longtime gang affiliate told the Free Press Thursday on the condition of anonymity. That’s the spirit. Rat out a real rat and make this world a better place.