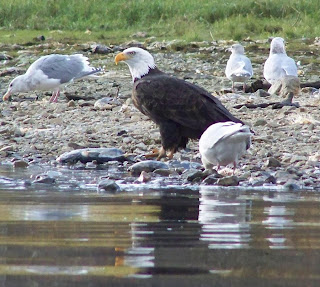 I took the kayak out on Harrison River today to see the eagles. The festival was last weekend but I like to go when there aren’t so many people there. They are really advertizing it a lot now with commercials on TV. Those tour boats are absurd. I had no idea how loud they were. They sound like a diesel train roaring up the river. 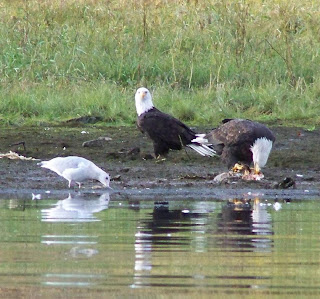 For people who want to see eagles I have one tip for you. Eagles are birds. When you’re looking for eagles you’re bird watching. That means you have to be quiet. Roaring up and down the river on a speed boat scares them away and defeats the whole purpose. 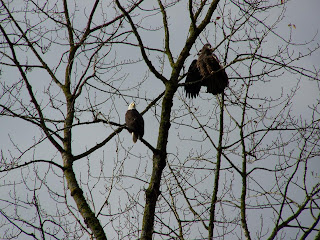 I put in a few weeks ago to check it out and the water was very high, very fast with a strong headwind. I could barely make it up to the bridge. This river must be tidal like Pitt Lake and Widgeon Creek. Today the water was much easier to paddle up but we were paddling upstream nonetheless. Right before I started to return home the current stopped and was like glass as though the tide was changing. Then on the way back, by the time I got to the bridge it was like the tide was coming upstream. I must have started when the tide was going out, been there when it stopped and retuned when it started to come it. I didn’t think Harrison was tidal because they claim Pitt Lake is the largest tidal lake in the area and Harrison is a bigger lake. Not to worry. 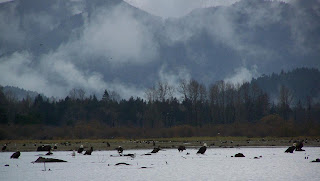 I paddle up where the speed boats can’t go where it’s quiet in 12 to 6 inches of water. The eagles are everywhere there feeding on the salmon carcasses. Rotting chum. We don’t eat chum. They’re kinda like the dogfish of salmon but the eagles like them. You can see chum spawning in Bear Creek in Surrey at the end of November. They look kinda beat up and radioactive. 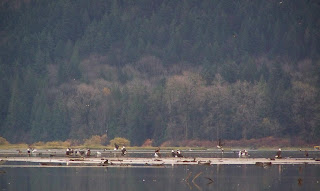 While I was there I looked up and all of a sudden I could see over a hundred flying very high over my head. You probably can’t see it very well in the pictures but if you click on the picture and see the enlarged view you can count the dots. There’s a lot. On my way up there was about a dozen flying very high up. When I came back with my car they were all gone. 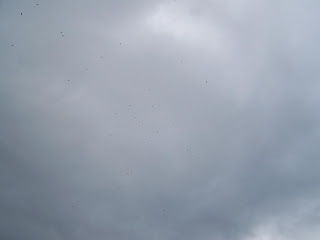 I saw quite a few flocks of trumpeter swans on the way up and on site. They really don’t like you getting too close to them. The sign said the trumpeter swans show up there when the rivers and lakes up north start to freeze over. The same with Pitt Lake. I’ve seen them there too this time of year. 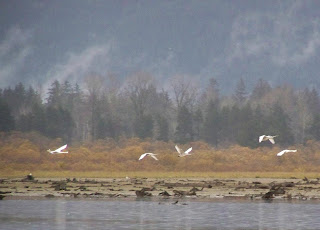 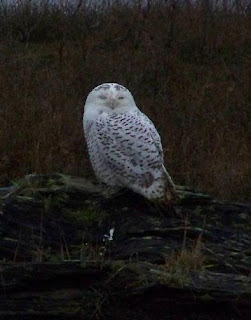 Another place for bird watching, aside from the Reifel range, (Reifel is the name of a guy not a place where we bring guns to shoot tweetie bird) is Boundry Bay in Ladner. Quiet and obscure, the Alaskan Snowy Owls migrate there during winter once every four or five years. It’s at the south end of 64th or 72nd Avenue off Ladner Trunk Road. Last year was one of those years. The snowy owls are pretty small but it’s interesting to see. 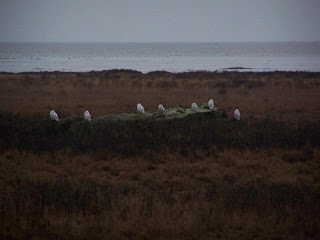 Sounds like the Alaskan Snowy Owl is back again this year.