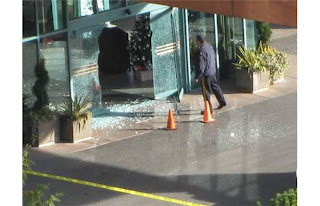 Sukhveer Dhak was shot dead in Burnaby today at the Executive Hotel and Conference Centre on the Lougheed Highway. Another very public shooting just like the one where his associate was gunned down at the Vancouver Sheriton Wall Centre. Today’s victim was also part of the Duhre / Dhak group that have been systematically assassinated for competing with the Hells Angels drug trade. We need to talk about who is responsible for all this public violence.

This is why all of their clubhouses need to be seized. They keep shooting people in public. Obviously they aren’t doing it themselves, they pay someone else to do it for them. Last August 13 Hells Angels plead guilty to murder and conspiracy to commit murder in Quebec. Later on it was determined that the Hells Angels had a murder fund where the members put 10% of their illicit earnings into. They paid $25,0000 for the murder of each rival drug dealer and every murder was approved by a committee.

The key thing to remember here is that they weren’t just murdering enemies from a rival gang. They were murdering rival drug dealers to take over the drug trade. They are doing the same thing here. That’s why not only should ALL their clubhouses be seized, but every member should be charged with murder. If you pay someone to commit murder, you’re guilty of murder. If you contribute 10% of your drug profits into a fund to murder rivals, then everyone who contributes to that fund needs to be tried with murder.