The Return of GSP 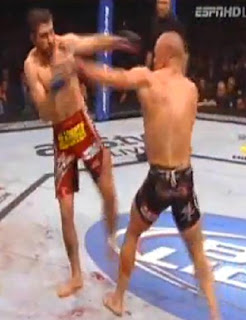 George St-Pierre won a unanimous decision in his come back fight last night with Carlos Condit after his knee surgery. GSP’s win will likely mean a super fight with Brazilian Anderson Silva. GSP said “I need to take some vacation and think about it." He might give Nick Diaz a shot first.

Daiz seems to be a bit of a mouthy bitch like Tito. CSP has way more class. Yet Condit was clearly groomed for his come back. A stand up fighter without ground skills who wasn’t as strong at stand up as GSP. GSP has ground skills but he’d have a serious challenge with Anderson Silva. Ya gotta respect the Brazilians ground fighting. They wrote the book on ground fighting.GSP is still the hometown favorite.