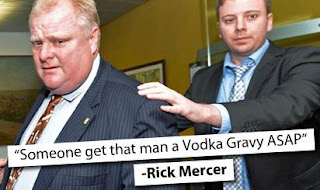 Ontario courts have found Toronto Mayor Rob Ford guilty of conflict of interest and have ordered him out of office. The abusive drunk has vowed to fight the court order tooth and nail.

The next day he apologized so that makes everything OK. Just like how he denied that he got drunk at a hockey game and was kicked out for being abusive to another couple at the game. The next day he admitted it was him. Or when he’s driving around town talking on his cell phones with personalized license plates that says ROBFORD. A mother and daughter tell him to get off his cell phone while driving so he gives them the finger. Real classy.

Come to think of it, the police were called to his home for a domestic violence complaint. He said they were separating but staying together for the kids so everything’s OK. Everything’s not OK. Rob Ford is an abusive drunk. It doesn’t matter whether he’s left wing or right wing. The president of the communist party in China recently got caught with his pants down in a sex scandal. The concern is Rob Ford’s abusive nature. Everybody thinks it’s funny he’s running around like he belongs on Jerry Springer but it’s not funny. He needs help and he should not be in politics.

Update: Seemingly Rob Ford is allowed to run in a by election so he partying like a rock star and canvassing the local night clubs for support. 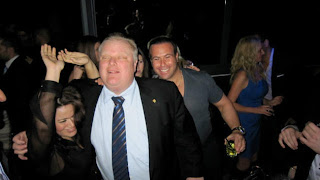