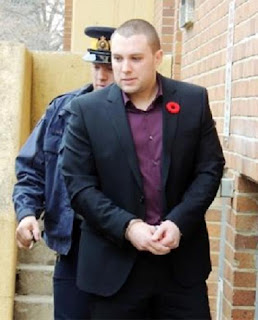 Brock Palfrey from Coldstream has pleaded guilty to trafficking on behalf of a criminal organization in a multi million dollar drug trafficking ring that moved cocaine and ecstasy across the Saskatchewan-Montana border.

The drug ring moved more than a tonne of cocaine from California across the Saskatchewan-Montana border and into B.C. In time, he maximized the trips by adding 790,000 ecstasy pills and 60 pounds of B.C. bud, destined for U.S. cities. The crown is seeking a 25 year sentence. Unlikely in Canada. I thought he was being tried in the States.

Turns out he’s being tried in a Saskatchewan court. Better than a BC court but not as good as a US court. 25 years is a long time. Unless they’re convicting real ring leaders like Larry Amero or David Giles, a 25 year sentence isn’t going to stop anything. The Hells Angels will just get another mule like Rob Shannon.

Once again we see drug trafficking charges on behalf of a criminal organization laid without naming the criminal organization. I have sources that claim Brock was working with the Hells Angels and was threatened by them just like Rob Shannon’s co accused was, to keep his mouth shut. I do feel sorry for Brock’s family but you’ve got to admit, all that money driving fancy cars and no real job is a red flag. Rob Shannon’s father was seen riding in his son’s expensive boat pulled by that ridiculous truck. He had to have known where that money was coming from.