The Separation between Church and State 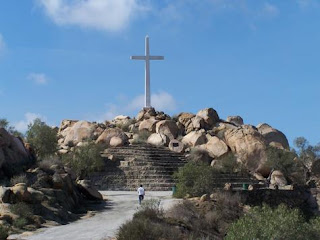 I have two moral thoughts before catching up on some biker news back east. The first involves the separation of church and state. Someone brought this to my attention on facebook and I’m astounded it’s even being considered. In Riverside, California there’s a popular hiking trail on Mount Rubidoux.

Mount Rubidoux is a public park beloved by the community and has had a cross on its top since 1907. It is home to what locals say is the longest-running outdoor Easter sunrise service, which began in 1909. A group of extremists calling themselves advocates for the separation of church and state have threatened to sue city council if the cross isn’t taken down. As a result, the citizens are rallying together to preserve the religious and historical monument.

If this is a religious and historical monument, then tearing it down would be a violation of the constitution and their freedom of religion. It’s not about preserving Christian principles, it’s about preserving the constitution. Tearing down all the statues of Buddha or Islam or any religious symbol is not supporting the separation of church and State. It’s supporting a Marxist Leninist Atheist sate I.E. Communism where you’re not allowed to worship how where or what you may. That is where we are going with this. Just so we’re clear.

Come to think of it, there’s a group in California that want to outlaw circumcision. Next they’ll want to outlaw personal hygiene. Jews and Muslims both believe in circumcision. That is their constitutional right. Violating the constitution is against the law. Everyone gets all freaked out as soon as someone threatens to sue. Let them sue and make a counterclaim for costs and damages. The constitution needs to be preserved. We know what the end result is if it isn’t.