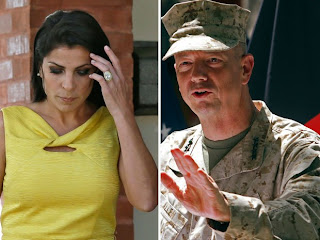 I’m all for scandals and conspiracies but this one is simply tabloid trash and when you put it together with the recent resignation of the director of the CIA, it smells fishy. Gen. John Allen, the top U.S. commander in Afghanistan is now under investigation for what is being described as "inappropriate communication" between the general and a woman implicated in the scandal swirling around former CIA director David Petraeus.

An unnamed Pentagon official told the Associated Press that between 20,000 and 30,000 pages of emails and other communications between Allen and Jill Kelley are under review. A senior defense official would only tell AP that some of the emails could be described as "flirtatious." However, other top officials have told AP that generally speaking, the messages are not sexually explicit.

Kelley was the recipient of threatening emails from Paula Broadwell, the 40-year-old woman with whom Petraeus, 60, admitting to having an extramarital affair. As the world turns. Who the hell cares? This is just soap opera drama. However, it does launch a parade of red flags. First we have big brother combing through 30,000,000 pages of private e-mail after searching their entire home for whatever they’re really looking for. Second, we have the Pentagon sending out press releases giving the media updates. That’s a red flag. If they weren’t out to get these guys, they’d be hushing it up. Instead, they’re on a character assignation campaign which is the first thing they do to a potential whistleblower.

Remember the Secret Service agents in Columbia that were caught stiffing a prostitute? There were tons of high ranking officials involved. No Pentagon press releases about that one and low and behold, it’s all swept under the carpet. Surprise surprise. Another red flag is that fact that General John Allen took over the command in Afghanistan from General David Petraeus. That means they knew each other and have worked together. It’s even possible that they were friends with each other.

Let’s put this in perspective. I certainly don’t condone adultery. Yet I find getting all freaked out because General Allen had private correspondence with some woman completely disproportionate when we say nothing about US troops helping protect the Opium farms in Afghanistan. That’s the real scandal right there. Not a word said about that though because the pentagon aren’t sending press releases out about that.

Reversing the contract for the oil pipeline is a way bigger scandal then a bunch of flirtatious e-mail. Yet that doesn’t matter because that’s the party line. What’s the matter, weren’t these guys gonna tow the party line any more?

Turns out court records show the former CIA director and Gen. John Allen intervened last September in a messy custody dispute on behalf of Jill Kelley’s sister, whom a judge described as dishonest and lacking integrity. This photo is of Petraeus with Jill Kelley’s twin sister Natalie Khawam. I’m not sure what all those beads he’s wearing represents but he looks like he’s having a good time. Somehow I don’t think there was anything secret about any of these relationships. 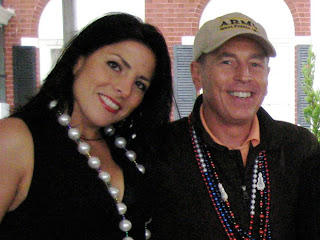