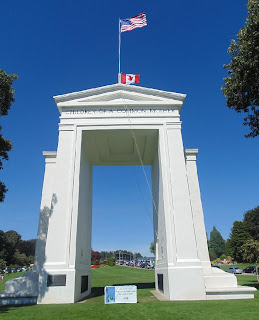 I attended the 9/11 memorial ride at Peace Arch today. It was mostly police, fire and first responders present. I have a memory card full of awesome pictures but have misplaced the memory card so I’ll have to paint a picture for you instead.

A blog reader sent me a poster about the ride before hand and when I asked if members of the Vancouver 9/11 truth movement were going to be present I’m sure they regretted sending me the link. I agreed that having a bunch of truthers on bullhorns disrupt the memorial by shouting 9/11 was an inside job over and over again wouldn’t be appropriate but something does have to be said. 9/11 was an inside job.

Truthers and Debunkers will both agree that 9/11 was a horrible human tragedy. It was a heinous murder and a lot of innocent people died. That much we can all agree on. How we respond to that horrific act is what causes the lines of division among us. I was there making a statement with a banner of my own that said Defend Civil Liberty. Protect the Constitution and the Charter of Rights. I had a flyer prepared but no one really asked any questions so I didn’t hand them out. However, many people did get their picture taken beside my banner.

I have two points to make. 9/11 was a horrible human tragedy. That much we can all agree on. I personally don’t want to let anyone use that human tragedy as an excuse to get rid of the Constitution and the Charter of Rights. I think that would be a serious mistake. A lot of innocent people died on 9/11 including first responders. We need to remember that and we need to protect the freedom they died for. You can’t protect freedom by doing away with it. The present attack on civil liberty by those sworn to protect it is a serious concern for everyone.

Most of us agree on that. Some believe that in the name of security we must violate civil liberty in order to protect it. I disagree. You can’t protect democracy by doing away with civil liberty. It just doesn’t make sense. In addition to addressing the fact that some want to exploit this tragedy to do away with the Constitution and the Charter of rights, there are a lot of unanswered questions about 9/11 that still must be addressed. Especially if we are going to let someone exploit this tragedy to break the law and fill us with fear and hate.

It was a positive and moving service. It started off with Bag pipes, another local tradition. After several speakers it ended with the last post on trumpet. Very fitting. Probably the most moving part of the ceremony was right before the end when they played a song about 9/11 by Alan Jackson called Where Were You (When The World Stopped Turning).

The chorus of which states: “I'm just a singer of simple songs I'm not a real political man I watch CNN but I'm not sure I could Tell you the difference in Iraq and Iran But I know Jesus and I talk to God And I remember this from when I was young Faith, hope and love are some good things He gave us And the greatest is love." Finally, a Christian uttering the forbidden word – love. The greatest of these is love.

Love beareth all things, believeth all things, hopeth all things and endureth all things. Martin Luther King said “I’ve seen too much hate to want to hate and every time I see it I say to myself that hate is too great a burden to bear.” Many are exploiting 9/11 to teach hate and intolerance. We need to rise above this. We also need to address the unanswered questions.

Firefighters are taught to aggressively attack fires in steel frame towers because they do not collapse. Yet these did. All three. Even the third tower which wasn’t hit by any planes. We need to address the manner in which those towers collapsed. They collapsed into their own blueprint at freefall speed just like a controlled demolition. The only way that can happen is if the load bearing beams are simultaneously blown out. Left wing kooks and right wing conspiracy theorists aren’t the only ones saying that now. Experts in the field of demolition are.

The Port Authority was denied a permit to demolish the towers because they were half full of asbestos and that would be too toxic for the public. All the first responders were poisoned by that toxic asbestos when the towers collapsed. We need to remember that.

No conspiracy theorist made up Operation Northwoods. We need to address that document because that sinister plan was actually implemented on the USS Liberty. President Johnston recalled the air support that went to protect the Liberty when it was under attack by a known ally. We need to remember the innocent people that died on that vessel as well.

We also need to remember the Air India bombing and how CSIS was responsible for that heinous murder. They had a handler that helped plan the attack and provided the explosives. They knew it was going to happen and erased all their wire tap evidence after it did to prevent them from being blamed for it. Yet their handler planned the attack and provided the explosives. Every time we attend a 9/11 memorial we need to call for CSIS to be charged with murder in the Air India attack.

There are a lot of unanswered questions that we need to discuss. Silence is not acceptable any more. We owe it to the innocent people who died and the freedom they all died for. 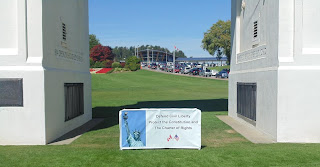