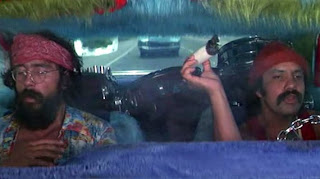 There has been a lot of debate about the legalization of marijuana recently. Justin Trudeau has sadly made it an election promise to legalize pot which has completely distracted his party’s platform from anything positive or constructive. His willingness to abandon the Charter of Rights while he pushes for the legalization of pot is somewhat suspect. We’re going to take your rights away and give away free pot so you don’t worry about it.

Several former Vancouver mayors have put out a declaration supporting the legalization of pot. Many advocates are pushing for the legalization of every harmful drug under the sun and even want taxpayers to pay for addicts harmful drugs like they are doing now with the “pilot” project at the Not so Safe Injection site in Vancouver. As if that won’t bankrupt our sacred medical system. You can't get an MRI but you can get free cocaine. The Issue even made the front page of the Vancouver Province asking which of the local political leaders have smoked pot.

Christy Clark said “There was a lot of that going on when I was in high school and I didn’t avoid it altogether.” Not a big surprise. At least she’s being honest. Most either said yes or like Dianne Watts and Jim Chu refused to answer the question. Refusing to answer the questions certainly appears to plead the fifth. They don’t want to incriminate themselves. If they have never smoked it they would say so. I notice they didn’t ask Toronto’s Mayor the abusive Rob Ford.

Port Coquitlam Mayor Greg Moore said “I have never smoked while in elected office.” White Rock Mayor Wayne Baldwin said “I do not have a need.” Both statements are pretty lame as well. It does not say they have never smoked pot. It’s like Rob Ford saying he’s not addicted to crack. He didn’t say he has never smoked it. In my opinion whether or not any or all of these elected officials have ever tried pot isn’t relative to whether or not we should legalize it.

My position is clear. I support the decriminalization of pot not the legalization of pot. I realize about 50% of people in BC support legalization but I am not comfortable with it. More than 50% agree with decriminalization. However, I completely agree that mandatory minimum sentences for the possession of pot is stupid and counter productive. It prevents us from applying mandatory minimum sentences for violent crime and for selling not possessing crack or crystal meth which is what we need to do.

After watching the documentary about the Mexican cartel on TV the other night called Narco Bling, the problem is overwhelming. From a strategic point of view I think they should set aside going after grow ops and prioritize going after crystal meth labs and cocaine which is sold here as crack. There is a huge difference between those drugs and burning up all our resources chasing pot prevents us from addressing the much more serious problem of crack and crystal meth. It’s like arresting everyone for speeding while letting everyone else commit murder. It’s disproportionate.

The new concern people have is Harper’s new attempt to prevent people with medicinal licenses for pot from growing their own pot for personal use. I think that is absurd and counter productive. It’s like banning generic drugs and forcing people to buy drugs from big pharmaceutical companies that have monopoles on the market. Somewhat suspect.

I don’t believe that bill violates the Charter of Rights but it does violate the Supreme Court decision that told the Federal government it needs to make medicinal pot more accessible for those who have prescriptions for it. I realize there is a problem with medicinal grow ops being taken over by the Hells Angels and them supplying the non medicinal market. Growing it for yourself however, with a prescription is not growing it for others. In this case Harper’s bill does help the Hells Angels monopoly on the market.

Likewise I find Dianne Watts’ campaign against allowing people with pot prescriptions to grow it for personal use to be hypocritical and counter productive. Maybe she should be a little more concerned with them selling crack in public outside the Front Room. I thought Dianne Watts was on the right track in the beginning. I was wrong.

Welcoming campaign contributions from Casinos where drug money is laundered and from dirty developers tied to Gordon Campbell and BC Rail is deplorable. Its like George Bush promoting a war on drugs while the agency and his campaign profits from a monopoly on that market. I’m not saying Gateway Casinos launders drug money. I’m saying that drug money is laundered at their Casinos which they profit from. What I want to know is how did Gateway Casinos lose $1.5 billion? Where did that money go? Answering that question would answer quite a bit about the real source of the Vancouver gang war.