The Surrey Six Trial is under way 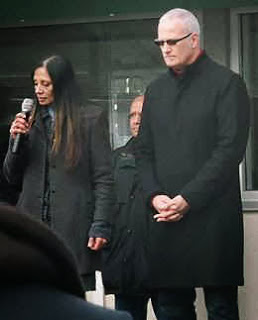 Well the Surrey Six trial is under way and I thought it was under publication ban since it has been split and divided into separate trials. Yet the media is all over it so I will simply quote what they said. Kim Bolan is tweeting a play by play.

The crown laid out it’s case which suggests that Corey Lal was the only intended target. The others were killed to eliminate witnesses. Jamie Bacon asked Corey Lal to pay him $100,000 tax for dealing on their turf. Bacon also confiscated Lal's glock pistol. When Lal didn't pay he was targeted in the Surrey Six.

There are a lot more details coming forward but as I previously said, I’m not covering this trial because I don’t want to screw it up. I do think evidence publicized from this case could jeopardize the other trials. I had heard the media was challenging the publication ban legally and they must have won so I’ll let them have at it.

The court room is packed and there are several other cases going on including the Cocks father and son who have been charged with the murder of Dain Philips. I don’t know why Robert Thomas is being tried separately on that one. That would explain the publication ban on that. There are things in that I would like to report on when that ban is lifted.

The Surrey Six trial is obviously big news locally. It was the reason my web site and blog started. I heard Eileen Mohan speak at a gang violence rally at Bear Creek Park when she made a public appeal for a web site to identify known gang members. I thought to myself, given my background, I could do that. I don’t think Eileen agrees with my politics or the way I mock gang members. She’s like Surrey’s own Mother Teresa. Her heartfelt appeal touched Person X's heart and cracked the case wide open. It is sad that Harper used her misfortune to promote his own dishonest agenda.

The reason I quote what the other media outlets are reporting about Jamie Bacon and Corey Lal is that it confirms my original premise. They wanted to tax the Red Scorpions who were working for the UN at the time. As we now know, the Bacon brothers were working for the Hells Angels. Jamie Bacon’s tax was for the Hells Angels less his and his brothers cut.