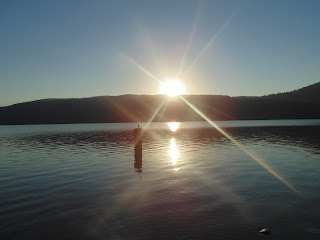 This is a picture of the sunrise over Kelowna before court on Friday the 13th. I had a magnificent trip but the trial was really upsetting. Instead of making a million separate posts every time there’s an update on the trial, I will simply add it to the bottom of the post I have already started. I will add a link to that post on the web site and at the side of the blog under links so it doesn’t get lost.

In this post I want to give an overview of what I have seen in court so far. Like I said it is a very real struggle of good versus evil. Brittney’s brother took the stand and I have to admit I have a huge amount of respect for him. I totally support everyone’s right to a fair trial. Joey is getting that and has legal representation. When people talk about removing that right from an accused terrorist I respond with why on earth would we do that? Even Clifford Olsen has the right to a fair trial. That is an important part of a free and democratic society.

Joey has two lawyers. One is young the other is old. Both are sharp yet the old man’s cross examinations are absolutely painful and are completely dragging the trial off into the realms of intergalactic irrelevance.

Politicians have a thing called filibustering. They talk for hours and days on end just to drag on debate. It is painful to say the least. This lawyer is the master of filibustering yet it goes far beyond that. He is the devil himself. That’s what this trial reminds me of. Every witness takes the stand and this slimy lawyer gets in their face and brings up every piece of dirt from their past in a character assassination attempt to make the jury disregard the witnesses’ evidence.

Britney’s brother totally admits he has struggled with drug addiction for many years. His sister’s murder made it much worse. Yet despite his struggles, he has dusted himself off and has stepped up to the plate in defense of his sister. A very noble act. None of us haven’t done something in our past that we’re not proud of. All of us make mistakes.

There are two concerns that I have about the satanic nature of Joey’s lawyer’s cross examinations. The first is relevance and the second is filibustering. When he cross examined the forensic specialist I had to leave the room and didn’t return until it was over. It was too painful to watch. He went on and on asking a million completely irrelevant questions dragging it on forever. As a result they didn’t get through nearly as many witnesses as they had planed. He was successful in that.

I am reminded of back in the day when I acted as co counsel in an unlawful discharge case back when I did some labour law. The corporate lawyers were slimy. Their MO was predictable. They would go on and on and on asking the witness 50 million obscure questions until they were physically and emotionally exhausted. Then they would try and trip them up by asking confusing irrelevant questions when they were exhausted. After confusing the witness and tripping them up they would then shout out ah ha! You just said this this and this, but three days ago you said this this and that. You’re a liar. That means none of your evidence has any credibility whatsoever. That was their MO. I kid you not. I saw it over and over again. That is what Joey’s lawyer is doing here. He is a slime ball.

Not only that. Not only is he stalling the proceedings off at a completely irresponsible rate burning tax dollars with gasoline, he is also spending hours on end asking 50 million irrelevant questions so the jury gets bored to tears and completely forgets the important relevant evidence the witness did submit. This guy isn’t just doing this to Brittney’s brother, he’s doing it to every witness the crown puts on the stand. He is burning tax dollars and thereby committing welfare fraud.

I can even see the pain in the judge’s face. Most of the time her eyebrows are scowling like what the hell is this guy on about, yet she continues to bite her tongue in the rare event something this nutbar might say could possibly have some kind of relevance to the trial because she genuinely believes the accused has a right to a fair trial. Which is indeed noble. However in this trial I really think that lawyer is totally exploiting everyone - the judge, the jury, the court and the public purse.

Interesting how this picture from David Bowie's Cat People video looks just like Joey's other lawyer. 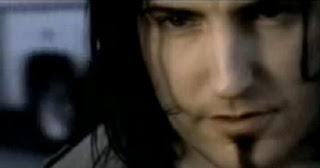