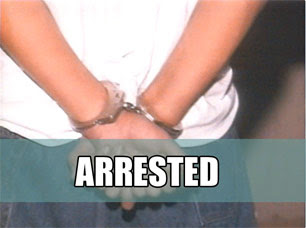 The Vancouver Sun is reporting that the Abbotsford police launched a crackdown targeting cocaine and heroin traffickers in Abbotsford's downtown core. Seven women and three men, ranging in age from 28 to 52, were picked up following drug purchases by undercover officers cruising city streets, laneways and parking lots.

All 10 suspects are well known to the department. Abbotsford police say the 10 people have been involved in more n 1,200 interactions with officers since 2005, with 146 charges recommended against them. Well done. That’s like the VPD targeting prolific offenders. This is the New York Model. Letting crack dealers sell crack in public is not the New York model. It’s that simple.

When Godzilla was first elected Mayor of Surrey she held a dramatic crime prevention meeting. She even had someone speak about the New York model. That’s as far as it went. Instead of harassing the crack dealers they harass the crack addicts. Putting a fence up around the Front room so the public don’t see the addicts doesn’t solve the problem. The crack dealers that sell crack in front of the Front Room are predators. It would be an easy task to identify and arrest them. When that isn’t being done it makes the public wonder who’s getting paid by who?

Evidently they have the same problem in the York City Pennsylvania. One local business owner was so fed up with the police not doing anything when he reported crack dealers to them he put up this sign instead. No doubt we could have one up in front of the Front Room in Surrey as well. 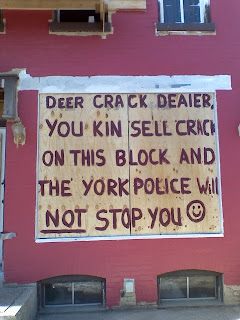 It’s the same problem in the DTES. The police are spending a great deal of time and energy targeting the homeless and giving them jay walking tickets while right beside them is a crack dealer selling crack and the police do nothing about it. That is disproportionate.

Kicking the cat is not the New York model. There is no reason the police can’t arrest the crack dealers at Main and Hastings. None. That is what they should be doing. Those drug dealers are predatory. They give homeless crack then beat the life out of them or push them out of a window for payment.

The police need to target the drug dealers not the addicts. It’s that simple. Without doing that we are all just wasting our time. In fact they should put undercover cops at Main and Hastings to pretend to sell crack. See how fast the Hells Angels enforcers come to stop them. Those are the predators we need to target.