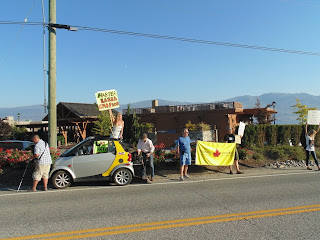 I had a couple days off work and made it into town for the Joey Verma trial. I have a lot more to say and report about that but need a break because it was very upsetting. It’s such a struggle of good versus evil Speaking of which, I was able to attend the Stephen Harper protest in Kelowna today. I have a lot more to say about that as well but will start with two issues presented. 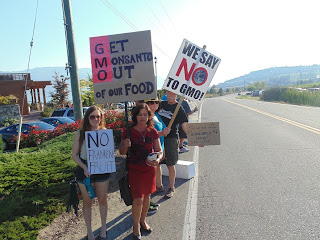 One issue that many locals had was about GMO – Genetically Altered Organisms. This is a huge issue with serious implications that are easily over looked by the public. We not taking about steroids to make food bigger or better. We are talking about food that is genetically modified with pesticides. I kid you not. 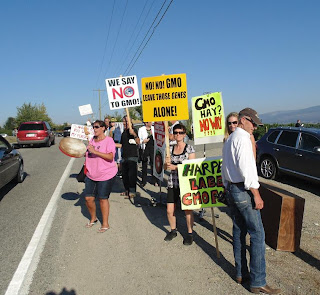 This isn’t jut someone spraying pesticides on a crop. This is someone injecting the pesticide right into the food itself. For example, BT is being injected into corn which is killing the bees. Killing insects is one thing but killing bees is another. When bees stop cross pollinating food stops being produced. The Council of Canadians were present as well. 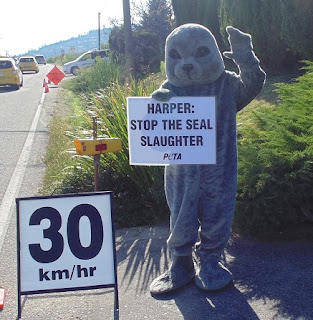 There was even a brave young lady dressed in a seal suit. It was very hot. I was worried about her getting heatstroke. Evidently Harper is bringing back the seal hunt. Even when it is a dying business that is losing money and being subsidized with tax dollars because Russia, our biggest buyer of the product banned it. This is another example of bad business financially and morally. There are many more concerns people had with Harper in addition to my own but I will start with those two and try and enjoy some sunshine on my way home.

Harpers entrance certainly looked like a funeral procession. He was in the second car. They told all the protesters to go on the other side of the entrance so Harper wouldn’t see them. Pretty lame. I’ve posted some more pictures of the protest on Flikr. As much as I have my own issues with Harpers lack of fiscal responsibility and his contempt for civil liberty, it’s clear that most of the protesters there that day were local Kelowna residents upset by Genetically Modified Organisms, also known as GMO. 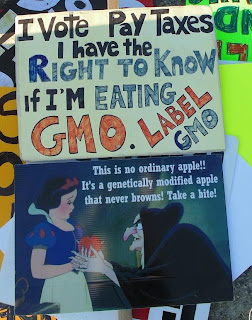 I had no idea what a huge and important issue this is. Genetically modifying food with pesticides that humans consume is absolutely insane. That is what we are talking about. These concerned citizens want all food that is genetically modified to be labeled as such since consumers do have a right to know what is in the food they eat and the products they buy. 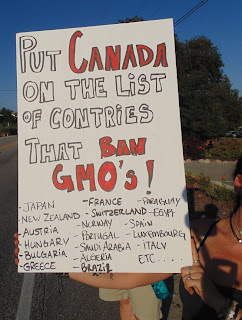 The other valid concern they have is that they want to ban GMO foods altogether like many other countries have. I met with a local bee store and they confirmed that bee populations in Canada and around the world have been decreasing over the last four years and it is likely due to the genetically altered food that is killing them. Europe has banned GMO and their bee populations are starting to return. 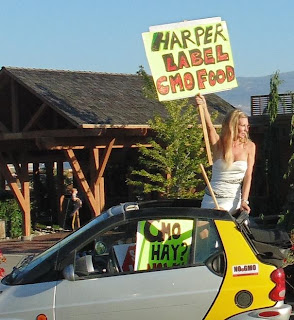 I met Kevin Proteau from locals supporting locals at the anti Harper rally. Heidi Osterman from the True food Foundation was also there. These aren’t left wing kooks. These are local businesses concerned about Harper killing their industry. Small businesses in Kelowna pulling together to support free enterprise. That is what conservatives were supposed to do. Now Harper kills small business and promotes corporate monopolies which destroys the free market. That is a growing shameful list that's following Harper wherever he goes. 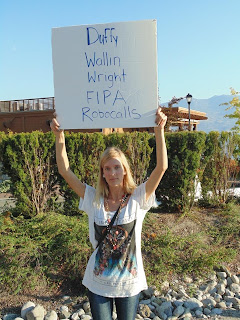