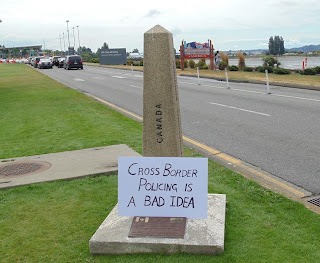 I understand that there has been a weekly protest at the Peace arch border crossing about cross border policing throughout August that culminated at the Labour Day long weekend. This is a copy of the front of a flyer that was handed out about the pilot project and this is a copy of the back of the flyer about Operation Fast and Furious.

Be aware that if you show up at Peace arch with a protest sign you have to be willing to go to jail. The caretaker will inform you that it is the park’s policy not to allow protest signs at the border. It is my position that policy is illegal. If I’m standing with a sign and they try to remove me they are going to have to get a cop not a border agent and arrest me. I will then sue for unlawful arrest. It’s the same at the Vancouver courthouse. They don’t like protest signs there either but arresting someone for standing on public ground with a protest sign is indeed illegal.

If I get shot tomorrow, there are two issues I want to leave on the table. The first is civil liberty. No matter how bad or violent the Vancouver gang war gets, we cannot let anyone use that to rationalize throwing away the Charter of Rights and giving up civil liberty. We can’t protect freedom by giving it away. The Constitution and the Charter of Rights is under attack on both sides of the border. We need to be vigilant in protecting those documents now more than ever.

The other issue I want to leave on the table is the fact that the Hells Angels are murderers. Not only are they involved in the drug trade, but they control it and murder rival drug dealers on a regular basis. They also torture and murder addicts for drug debts. That needs to be addressed. If I get shot tomorrow I want to leave those two issues on the table. That is what this is all about.

CBC is reporting that the U.S. wants cross-border officers exempt from Canadian law. Many people are really concerned about that. Giving any police force diplomatic immunity is insane and illegal.

Posted by Dennis Watson at 5:07 AM