A Bear encounter on Grouse Mountain 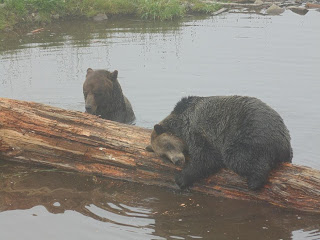 I enjoy the Grizzly bear exhibit on Grouse Mountain. It never ceases to amaze me that tiny electric fence holds back such massive and powerful bears. Coming face to face with a Grizzly in that setting is a good thing. It helps people see them for what they are and understand how connected we are and how important it is to protect them. 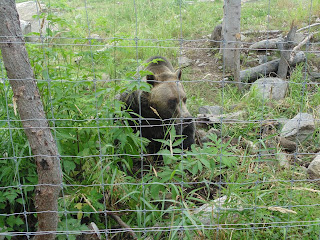 I went up Grouse today and after passing by the Grizzly exhibit I hiked up the side of Dam Mountain to Goat Mountain. There is a lot going on at Grouse. The new zip lines are pretty cool. The fog rolled in so the helicopter tours and the parasailing were grounded. 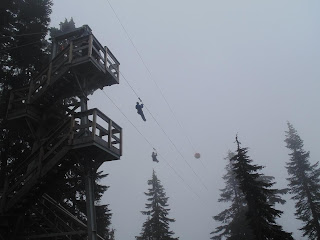 I decided to proceed with the hike anyways because I wanted to get some cardio in as I’m hoping to make another attempt at the Lions this year. Right before I get to Goat Mountain I’m walking along a narrow trail in a wooded are then all of a sudden there was a big thump and grunt on the trail right in front of me. This big ass bear stumbled down the hill out of the bush onto the trail right in front of me. We were both startled and it made an aggressive sound that made me reach for the bear spray instead of my camera.

The bear shot off the trail so I cautiously proceeded ahead talking loudly but calmly letting it know where I was so it wouldn’t be startled. The trail made a sharp turn to the left up the mountain and I saw someone coming down. I said did you see the bear? He said yeah it’s a cub right in that tree. I slowly turned my head to the left to look at the tree right beside me and the trail which was shaking and I said that tree? He said yeah. OK it’s time to turn around I said. I just saw it’s mother down there and she wasn’t happy. You don’t want to get between a mother bear and her cub and I didn’t want to spray a bear protecting it’s cub.

Normally seeing a bear in the wild is not a big deal. You make noise, let them know where you are without sounding threatening and everything is fine. In this case we were caught right between a scared cub in a small tree and it’s angry mother. Not a good place to be in. We walked for about five minutes and I said OK I’m having lunch and stopped for a break. A few hikers passed and I told them about the bear. Some were cautious, some proceeded anyways. I waited until the bear had a chance to get the cub off the trail, and proceed up the mountain without another incident. 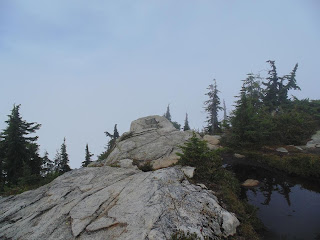 It’s unfortunate the fog cut the visibility because the view from there is amazing. You’re right beside Crown Mountain and from Goat Ridge you get a magnificent view of Coliseum Mountain over in the Lynn Headwaters. This is a picture of Goat Ridge on a clear day.

The bear encounter made up for the limited visibility. Ya gotta respect seeing animals in the wild. When I was a kid Stanley Park was a zoo. There were black bears, polar bears, penguins and sea otters. Kids today don’t see that and are sometimes distanced and removed from nature and the animal kingdom. Perhaps that’s part of the reason there is such a wanton disregard for the environment now a days. A lot of people do care about the environment but many others don’t.

I saw a ridiculous article recently about someone promoting a garbage incinerator in Surrey claiming that people think the brown haze in the Fraser Valley summer air is from pollution but it’s not. The guy was on crack. Of course it’s from pollution. That’s why they announce air quality levels on the news during the summer. The Fraser Valley is a valley surrounded by mountains. In the summer the air doesn’t move and the pollution just hangs there.

All you have to do is drive up to the look out on Cypress Mountain any time of the day or night. Everywhere you look you see smokestacks billowing smoke into the air. That’s why there is a brown haze over the Fraser Valley. Burning toxic garbage would increase that pollution exponentially.

When you’re up in the mountains, you don’t have to be a tree hugger to see and feel how connected we are to the environment we live in. Hiking up the mountain getting the lungs working and the heart pumping with all those big trees around breathing in all that fresh air. We breathe in the fresh oxygen the trees produce and they absorb the CO2 we exhale. We are totally connected. We are a part of the ecosystem. Damaging the ecosystem doesn’t just create an imbalance, it also damages us. The air we breathe, the water we drink and the food we eat. It really is that simple.

The insane greed that is consuming these short sighted rapists who want to burn toxic garbage and burn enough coal to blacken the planet is really astounding. As time progresses we are supposed to get more technologically advanced. As we go to school we are supposed to get more educated. I don’t see it with this corporate greed that is driving us down the road to Bilderberg.

Small business is good. Corporate monopolies are not. Preston Manning said being environmentally responsible is being fiscally responsible. Fiscal responsibility means we don’t leave our children a huge debt. It’s the same thing with the planet. We want our kids to have a planet to live on as well as their kids. Future generations. That is progressive thinking. This coal obsession and Garbage Incinerator is Devolution. We’re going backwards not forward and it's greed that’s driving it. Blind, short sighted, selfish greed.

Posted by Dennis Watson at 9:10 PM