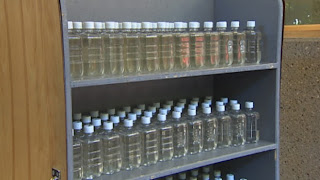 The Vancouver Province is reporting that two Kelowna residents are facing potential drug trafficking charges after police executed a search warrant on a home in the 300-block Moubray Road. Police seized more than 10 litres of GHB (gamma-hydroxybutyrate, which is used as a date-rape drug), several ounces of cocaine, crack cocaine, and crystal meth, 10 bottles of methadone, and small amounts of heroin, marijuana and various pills.

A 33-year-old woman and a 47-year-old woman, both from Kelowna, were arrested and then released on a promise to appear. They are expected back in court on Nov. 14. Two women selling date rape drug. Wonderful. We're still waiting on names and affiliations.

Earlier this summer police in Edmonton seized 106 litres of GHB along with cocaine. People are starting to call it liquid ecstasy. Work with me people, this stuff is not ecstasy. They even use it on guys for the purpose of committing rape.

Posted by Dennis Watson at 6:53 AM