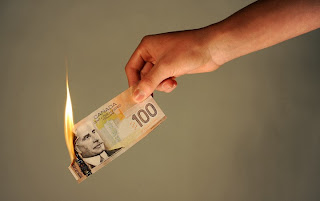 It is no secret that I have huge concerns with the Harper government's bizarre inconsistencies. However, this is one statement I finally agree with. Fred DeLorey the Director of Political Operations for the Conservative Party of Canada just sent out a simple but factual e-mail about tax dollars buying heroin for addicts. In the words of Abraham Lincoln, stand with any man when they stand right and part with them when they go wrong. On this issue, they finally have it right.

Here we see the insane "pilot project" at Insite the not very safe injection site taken to the logical extreme by corrupt medical officials and another bogus online poll. Doctors want to be able to prescribe heroin to addicts. God help us. Will they prescribe alcohol to alcoholics and make tax payers pay for it? This is insane and has absolutely nothing to do with the promotion of health, it is the destruction of health. It's not harm reduction it is harm mass production.

No taxpayer in their right mind supports spending tax dollars on heroin for addicts. That online poll is fraudulent. It is corrupt members of the medical and pharmaceutical community pushing this insane agenda so they can make money off the prescriptions. Their abuse and mismanagement of the methadone program is bad enough. Now their greed is taking them to the realm of absurdity. We can't afford an MRI but we can spend tax dollars on heroin. That is wrong. It doesn't take a brain surgeon to see it.

CTV is reporting that Health Minister Rona Ambrose is slamming her own department's decision to provide heroin to certain addicts under a special access program and insisting it won't be allowed to happen again. However, the department has just approved an application that would allow addicts to use heroin -- a decision with which Ambrose clearly doesn't agree. "This decision is in direct opposition to the government's anti-drug policy and violates the spirit and intent of the special access program," she said in a statement.

Libby Davies claims that "Medicalized heroin maintenance has been used very successfully and in places like Europe is seen as part of treatment." Wrong! The Amsterdam model has failed. Of all people, Libby Davies should see that the DTES model has also failed miserably. We are murdering people with tax dollars. Injecting poison is not safe. Turning human beings into zombies is not compassionate and does not promote heath. This is where the NDP completely fails in it's duty to address the drug violence that is preying on and exploiting the poor and the homeless.

This is the E-mail from Fred DeLorey which I totally support:

"Drug addiction is a very serious problem in our communities. Drugs like heroin tear families apart, promote criminal behaviour, and destroy lives. That’s why our government has focused on stopping illegal drug use and treating addicts in a safe way. But drug treatment programs should be focused on ending drug use – not giving illicit drugs to drug addicts. That’s why I was shocked to learn today that Health Canada approved funding to give heroin to addicts – against the wishes of our elected government. We’re going to take steps to make sure this never happens again – but we need your help."

"If the NDP or Liberals are elected in 2015, you can bet they would make this heroin-for-addicts program permanent. We can’t let that happen. We’ll keep fighting to keep our streets and communities safe, but we need your support. Will you stand with us? Add your name here:"

This program is illegal. They already abuse the methadone program by refusing to decrease doses. It's a huge money maker for the pharmaceutical companies and the medical profession. In contrast, an ex-heroin addict reveals how drugs nearly killed her. Now she is giving back to society for helping her kick the deadly habit. Tax funded drug rehab programs need to support programs that help addicts get off drugs not perpetuate the problem with more drugs. That is the four pillars.