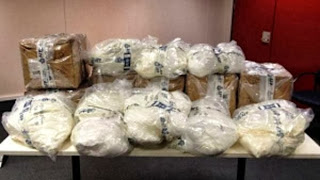 Eight Canadians and two Australians have been arrested after an 18 month investigation which resulted in the seizure of 650 kilograms of pseudoephedrine that had been hidden in vanilla powder jars last month in Melbourne. They said the chemical came from India and is used to produce crystal meth.

Three of the Canadians - Catherine McNaughton, 30, Edmond Proko, 46, and James Kelsey, 27 - appeared in a Melbourne court today charged with drug trafficking. They're due back in court in January. Crystal meth is not speed. It's made with Drano and is incredibly toxic. Melbourne has a problem with Hells Angles violence right now. In the United States the Hells Angels were convicted of large crystal meth rings on the east coast.

The Vancouver Province is reporting that the CFSEU claims key figures in B.C.'s gang scene were involved in moving cocaine and crystal meth between Canada and Australia. More than $35 million worth of cocaine and meth was seized in Australia during the investigation.