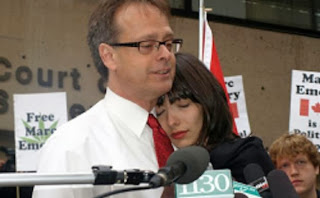 I understand that Clay Roueche has applied for a prison transfer back to Canada. I think there is no question that request should be granted. I was surprised to hear how his lawyers never objected to how he was initially shafted. He was on his way to a wedding in Mexico and they rerouted his plane to land in the US so they could arrest him there. That was dirty. They should have extradited him like Marc Emery. Trevor Jones is one person they should extradite along with his brother Randy. If Trevor was involved so was Randy. Randy is the patch member not Trevor.

Marc Emery should get a prison transfer back to Canada as well. He was in Canada when he committed his “offense.” Running an Internet business supplied customers in the States but he was not physically there they had to extradite him. Natural justice would require him to be permitted to serve the rest of his sentence in Canada.

Sadly, Marc Emery has been transferred from the West Coast to a prison in Georgia. In a Nov. 17 letter to his wife Jodie Emery posted on his prison blog, the longtime marijuana activist said he was supposed to be sent to a federal institution in California “but the [Bureau of Prisons] has changed it to send me as far away from you as possible.” That’s just not right.

We were told that Marc was finally approved for a prison transfer to Canada last July. He’s still waiting. The approval was just a PR scam. The mistreatment of prisoners is like beating your wife. It shows a lack of self respect.

Guantanamo Bay is wrong. Torturing prisoners is wrong. It was wrong when Hitler did it, it is wrong when we do it. Which brings us to prison conditions in Canada. Harper is a pretty confused individual. Either that or he’s a malicious liar that says one thing and does another.

I know a local activist that said he met Harper at the airport during the last election. My first thought was did you punch him in the head for me? Instead he said he shook his hand and thanked him for giving us more money for prisons. I just about choked. More money for prisons? Did you know he cut funding for the RCMP and the Gang Task Force after he was elected? Since getting his coveted majority government he also cut funding for prisons. He even closed the largest prison in Ontario with no plan to build another.

Recently prisoners went on “strike” because Harper dramatically reduced their insignificant rate of pay if they choose to work while incarcerated. That is just plain wrong. When you remove incentive what are you left with? Communism. A system built on incentive is a good thing. Privatizing the prisons and mistreating prisoners is not.

Evidently Marc Emery supporters are taking his cause to Ottawa and his wife Jodie will be holding a press conference Tuesday. They are wanting him to be transferred back to Canada like both parties said they would. This is a reasonable request that I totally support. All drugs are not the same. There is a huge difference between pot and crack. Marc was just selling seeds and supports the legalization of pot like in Washington and Colorado. Intentionally screwing with him by sending him to the other side of the US and denying his prison transfer after they publicly said they approved it is petty and cheap.