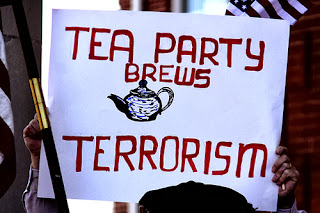 The second act of domestic terrorism I’m going to cite is the current government shut down in the US. Here’s the deal: Obama wins the election. He follows through with his campaign promise to create affordable medical insurance. The bill passes in the house. So what happens? A few extremists say OK we lost the vote so now we are going to hold the country hostage and shut down the government until we overrule the democratic will of the people. That is terrorism.

In a democracy you vote against something and record your dissent if you get out voted. You don’t hold the country hostage by an act of terrorism that damages the economic stability of the nation. I’m not sure where on earth that insane clause comes from but I can’t see it being a part of the constitution. It has to be something new someone just made up because no one has done it before until recently.

The other criminal act that has taken the nation away from a democracy is the new provision that you can have anonymous corporate donors to a politician. That is a crime. It is the opposite of transparency and fiscal accountability. In an era of making trade unions and large corporations document how much they donate to a politicians campaign, these anonymous donations are unlawful and undemocratic.