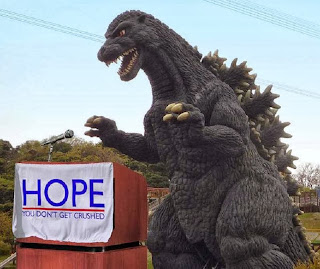 I saw this article about bribes at Surrey City Hall when it came out but couldn’t find any direct links to Diane Watts. However, a blog reader just sent me a link to the article with the following two quotes: "an unnamed female who allegedly helped Akolo with his transactions" and “Many people have their hands dirty and don’t want to be named.”

I had totally missed that. That is significant. Obviously the unnamed female doesn’t have to be Dianne Watts. However the claim that Many people have their hands dirty and don’t want to be named is very believable and very significant. It wasn’t just one fall guy as they are trying to portray. Godzilla’s Ivory Tower is made of glass.

Posted by Dennis Watson at 6:47 AM