US caught spying on France 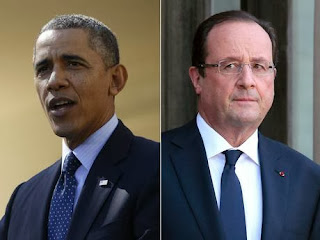 Oops there goes another allies’ rights. Obama is back peddling after the US was caught spying on France. A French newspaper said the NSA swept up 70.3 million French phone records in a 30-day period. France has summoned the U.S. ambassador, Charles Rivkin, to explain and called the practice "totally unacceptable."

The U.S. is reviewing its intelligence gathering to strike a "balance between the legitimate security concerns that our citizens have and the privacy concerns that we and our allies have as well about some of these alleged intelligence activities." Which really means nothing. It’s a rationalization for violating the US Constitution and spying on anyone they want whenever they want. More revelations thanks to the American whistleblower and constitutional hero, Edward Snowden

Let’s not forget how the US Intelligence agency sold the RCMP the Promis software for keeping track of it’s files. It had a Trojan horse in it that gave the agency access to all the RCMP files. Isn’t it ironic that they didn’t even change the name of the tracking program for the new software that tracks all our medical records in BC. This gives the NSA direct access to all our medical records. Civil liberty is under fire.