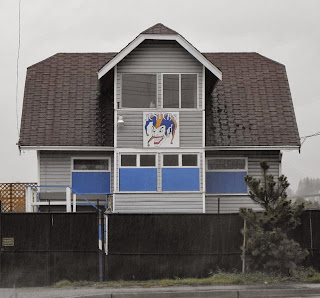 Global is reporting that "Business owners in a notorious Surrey neighborhood are struggling with what to do about the high crime rate. Just last week, a family physician considered leaving after metal thieves cut power to his building in Whalley. Turns out, he’s not the only one in the area affected by crime. Many of the local businesses say they’re getting little help from police. Randy Jarry’s Pick and Pull car parts business is a prime target for thieves. In fact, he says the scrap yard is hit overnight several times a week."

Why that's right by the Jesters clubhouse. Metal thieves supporting a drug habit. The tapeworm economy continues. So when City Hall accepts campaign contributions from Casinos and dirty developers where drug money is laundered, local businesses suffer. Glad to see Godzilla has solved all the problems in Surrey by banning Surrey shirts from the mall. The Surrey Winter fest continues to spotlight crime in Surrey. Something Godzilla promised to do in her initial crime prevention coalition but never did. Personally, I think Bill Fordy is too busy grooming himself for an MLA job like Peter Fassbender got.

It would not be very hard for the police and the city to target the scrap companies that accept all that stolen metal and it would not be hard to arrest the predatory crack dealers outside the Front Room. Those are two simple tasks. That fact that they aren't doing that is very suspect indeed. Like I said, Montreal has nothing on Surrey as to corruption. We're worse than they are.