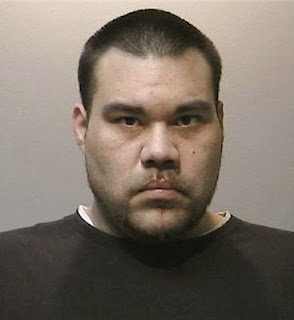 The StarPhoenix is reporting that Nicholas Clifford Giroux the man charged with murdering a young Saskatoon father in a North Battleford hotel room has ties to Saskatoon’s Terror Squad street gang. Who in turn work for the Hells Angels.

“Giroux, a Saskatoon resident, is a self-described founding member of the Terror Squad, the StarPhoenix reported when he was sentenced two years ago on a cocaine trafficking charge.” Gee, I wonder who he was selling cocaine for?

“Giroux also made his first court appearance Tuesday on two assault charges. He is charged with assaulting a woman in Saskatoon on Sept. 20, then assaulting the same woman again, this time allegedly with a hatchet, on Sept. 22, and threatening to kill her.” Another woman beater. Attacked a woman twice, once with a hatchet. Sounds like a Hells Angels prospect to me.