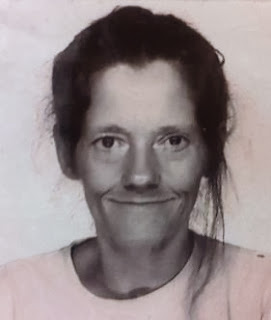 As we highlight the Surrey Winter Fest we need to take time to remember the patron saint of Whalley, Janice Shore. We need to remember what Janice was like as well as how and why she was brutally murdered. Let's not forget, whoever killed her is just another woman beater.

Janice was homeless. It has been said that she had mental health issues and struggled with addiction. However she was a user not a dealer so if she was murdered for a drug debt, then it couldn’t have been a large one. Janice was a human being. A wonderful one at that. She was polite and soft spoken. Her brother referred to her as sunshine and you can clearly see it in her face.

She was an easy mark for the predatory drug dealers outside the front room where she was last seen before she was murdered. I have a new revelation about who’s supplying drugs at the front room but before I post that I want us to remember the horrifically brutal manner in which she was murdered so we can clearly see who the real rats are in this picture.

The fact that she was brutally beaten beyond recognition is not under dispute. She was beaten into a coma from which she never regained consciousness. I visited her in the hospital. On one side of her head her jaw was completely caved in. On the other side of her head her temple was completely caved in. I wondered at the time and thought that it must have been blunt force trauma that caused those injuries. Recently I saw a guy at the Front Room with a hammer then the light went on. A hammer could have caused those injuries.

That part of the story is not disputable. Whoever did that is the dirties kind of rat known to man. Reporting that person to the police is not being a rat. Failing to do so is. However, the story gets even worse.

The Surrey Leader initially reported that they spoke with the person who first discovered the body. He said that although he knew Janice he did not recognize her because of her dramatic injuries. He said that he found her chained to a tree with her underwear pulled around her ankles. It had the dramatic appearance of a brutal sexual assault.

I know the mayor doesn’t like to admit Surrey has crime any more. I know the mayor is very concerned about her political future and spends a great deal of time and money trying to convince the media she is the best thing since sliced bread. I used to think so. Until I saw her for the bully she really is.

Bill Fordy is also deeply concerned with his political aspirations just like Peter Fassbender. The police were pretty adamant that Janice was not found bound to a tree when they found her and went to great efforts to down play that claim as well as the sexual assault claim. They said they had no evidence to support those claims. Yet that is not entirely true. They had the witness’ testimony who found the body. In a court of law, a witness gives testimony and that becomes evidence. I submit that the police do have some evidence that would suggest she was raped and bound to the tree. It is quite feasible the person who found her untied her before the police arrived.

Either way, these claims do not diminish the horrific nature of the assault. The other claim which I don’t think the police dispute is that the assailant scratched her eyes out. I can’t remember seeing her eyes in the hospital. They were closed because she was unconscious. If that is true, if her eyes really were poked out, we need to remember that as we look for suspects and search our souls trying to define what a rat really is if we consider protecting them.

If you know anything about Janice Shore’s murder contact IHIT at 1 - 877 - 551 - 4448 or contact me. We need to deal with this. We need to prevent it from happening again and we need to stop the predators giving the homeless free drugs then beating the life out of them for payment.