Reflecting on the homeless in East Vancouver 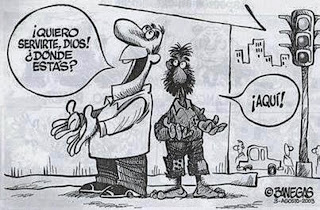 I have a friend who is a hunter. I’m told today is the opening of duck season. To commemorate the season, last night I went hunting in East Vancouver for the weasel that has threatened my daughter and put her life at risk. I had something to eat at a restaurant in Chinatown, and then roamed the old stomping ground in the DTES.

Years ago I did volunteer work in East Van. Before I left to travel the world, an image I had left a lasting impression on me. Back then crack hadn’t hit the streets yet. It was heroin and aftershave. The winos would run out of money for cheap wine and drink aftershave to get a buzz. If you didn’t have a mental disability before that you sure did afterwards.

I remember seeing an older homeless man wacked out on aftershave clinging to a tree in a park at the side of the road. He was holding onto the tree to help him keep from falling over and he was just staring off into space. At the time I thought to myself how can anyone see that and not have a desire to help. There has got to be something we can do to help this person.

I really get upset when people coin the phrase oh they want to be homeless. Nobody wants to be homeless. There was a woman who died camped out on Granville one cold winter. A street worker tried to help her get into a shelter but the shelter wouldn’t let her in with a pet or with her shopping buggy of her world possessions. To everyone else it was garbage. To her it was all she had. So instead of giving up all she had left, she stayed in a plastic shelter in the bitter cold. She begged the street workers for a candle to keep warm. The candle ended up catching her shelter on fire and killed her.

I’m not saying the street workers were wrong for giving her a candle. She was freezing cold and begged them for one and it did give her a small amount of temporary relief. I’m saying that woman didn’t want to be homeless and that event was a real life tragedy. Thankfully First United has since set up a program where the homeless can check in their shopping buggy of belongings so they don’t get stolen or prevent them from getting into a shelter. That is a good program worth supporting. The problem is there just aren’t enough shelters.

I parked near Pigeon corner and walked up Blood alley for old time’s sake. The allies are much cleaner now but the rat infestation is much worse. As soon as I entered the ally a big ass rat kept scurrying back and forth in front of me. It kept getting closer and closer as I was stomping my foot and almost had to crush it with my boot before it ran off and scurried up the wall beside a drain pipe.

Back in New York they used to joke about the rats. They used to say the rats in the tunnels were so big they barked. Yet the rats I saw last night were huge. Three big ass rats and one small mouse in a very short walk in the alley. Yes there was a woman sticking a needle in her arm shooting heroin. She was heavier. Not your typical skin and bones addict. She must be a new addict. Fresh meat so to speak. It won’t be long before that poison turns her into a zombie and kills her like so many others the predatory drug dealers have exploited and profited from.

Before I went home I said to myself I’ve got to go for a ride through Stanley Park. I need a change of scenery. There’s more to life than this. I stopped at the parking lot beside the totem poles and the water was calm and serene. The city lights reflecting on the glass like water was magical. I thought to myself it would be a great night to put the kayak in for a night paddle. A bit chilly but very serene. There were no campfires on third beach last night. It’s starting to get colder. Colder on the bike these days too, though nothing compared to back east.

Colder living on the streets as well. I’ve experienced homelessness arriving back to my hostel late after curfew in London. After getting locked out I soon discovered how cold concrete is when you try and sleep on it. That’s why people set cardboard down as a ground sheet first. Housing is a big problem in London or at least was when I was there. I slept in a park beside a hostel for a while. I could use the shower at the hostel until I got paid from my new job and was able to afford a bedsit.

Back then the cost of housing compared to wages was very challenging. It’s the same here now. Usually on social assistance people are forced to choose between food or housing because you can’t have both. That’s why people turn to drugs or alcohol to numb the cold of life on the street.

Imagine years ago, someone handing out free wine at pigeon park. Here have some of this. Everyone would be like alright, party. Imagine afterwards that person coming back to those homeless and saying alright today you have to pay for all the wine you drank. But we don’t have any money. That’s why were homeless. I don’t care he says. If you don’t pay for the wine you drank I’ll kill you. Find the cash. People start scrambling to get the money. Pan handle, steal, pawn. It’s not enough so the dealer pushes one of them out of a window and kills her to send a message to the others. Pay up or we will kill you. All of a sudden there minutes of relief has turned into a life of misery scrambling to pay their debts and pay for their new addiction.

It’s hard to conceive that anyone could be so cruel to offer free wine at pigeon park then threaten to kill the homeless for not paying for it after the fact. Many of those people have a mental disability. Yet that is exactly what the predatory drug dealers are doing at Main and Hastings and outside the Front Room in Surrey. Giving the homeless free crack then threatening to kill them after they are addicted when they don’t have enough money for food or housing is predatory. That needs to stop.

The cartoon in the top picture was from my daughter. It's in Spanish. The guy is looking up to heaven and saying where are you God that I may serve you? Then the homeless man behind him is saying I'm right here. Christ said Inasmuch as ye have done it not unto one of the least of these, ye have done it not unto me. Mother Teresa quoted Gandhi who said He who serves the poor, serves God. And Moses said, let my people go.