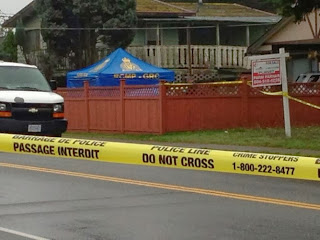 The Vancouver Sun is reporting that Surrey just had it’s 19th homicide this morning. News 1130 is reporting that it happened around 156 Street and 86B Avenue. Some people in the neighbourhood report hearing four shots just after 5 a.m. Sergeant Jennifer Pound says the victim was in his mid-30s and other people were home at the time of the shooting. The man has no criminal record and police have not been to the house before.

Kim Bolan is reporting a shooting in Vancouver Friday night at 17th and Fraser just after 8 p.m. The 29-year-old victim is known to police and remains in hospital in serious condition. CBC is also referring to it as a targeted shooting.