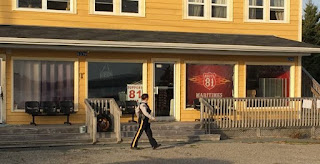 The Toronto Star is reporting that "Police say two Hells Angels members from Nova Scotia and Ontario face drug trafficking and other charges after a nine-month investigation. RCMP say Mark David Heickert — a full-patch gang member of the Oshawa Hells Angels — was arrested at a home in Orillia, Ont., without incident. The 48-year-old man is charged with conspiracy to traffic in cocaine and conspiracy to possess proceeds of crime. Paul Francis Monahan of Halifax, 61, is charged with several counts including trafficking in marijuana and conspiracy to traffic cocaine."

CBC is reporting that police seized two kilos of cocaine and that the Halifax man was a associate of the New Brunswick Nomads while the Ontario Village Idiot was a full patch Hells Angel from the Oshawa chapter. Unike BC, Nova Scotia and Ontario are confronting OMGs that sell drugs. In Surrey they provide them police protection.

Hells Angels associate Sean Heickert was found guilty of the November 2007 murder of Bekim Zeneli which set off the Winnipeg gang war. Bekim Zeneli was the leader of a Hells Angels puppet club called LHS - Loyalty Hounour Silence. Heickert owed Zeneli $3,000 at the time of his death. So Sean killed the associate to avoid having to pay him the money he owed him. Who's the rat now? James Heickert, A full-patch member of the Oshawa Hells Angels plead guilty to plotting to murder his own brother Sean Heickert over drug trafficking turf. Sounds like a dysfunctional family to me. Ontario Village Idiots alright.