A party bus burst into flames in Vancouver 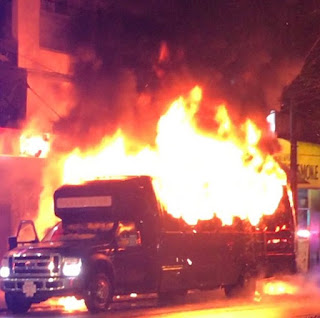 CBC is reporting that "No one was injured after a party bus burst into flames in downtown Vancouver Saturday night. Several witnesses shared video of the fire on social media, which officials said was burning in the rear of the vehicle when crews first arrived around 10 p.m.

'They did have a challenge with shutting off the engine,' said Assistant Chief John Zacharuk with Vancouver Fire Rescue Services. 'They had no way of shutting off the engine as the cab was burnt, so they had to manually choke off the air filter.' Zacharuk said the fire also spread to a nearby tree and part of a storefront awning. No injuries were reported. The cause of the fire is under investigation."