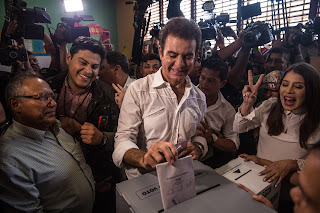 It is somewhat amusing to see how the American media is spinning the Honduran election. Reuters is reporting that " A TV host was on course for victory in the Honduran presidential race on Monday, in a dramatic election that upended forecasts of a win for the country’s U.S.-friendly incumbent. Flamboyant entertainer Salvador Nasralla, 64, was ahead by a 5 point margin with 70 percent of ballots counted, election official Marcos Ramiro Lobo told Reuters. That was too large a lead for his rival, center-right President Juan Orlando Hernandez, to overcome, Lobo said."

The New York Times is reporting that "A TV host was on course for victory in the Honduran presidential race on Monday, in a dramatic election that upended forecasts of a win for the country’s U.S.-friendly incumbent.". Now The New York Times is very credibility. However, *someone* is feeding them information that might not be entirely acurate and it *might* be the same ones that were involved in the Honduran Coup back in 2009.

Article 239 of the Honduras constitution clearly prohibits a president from serving more than one term and indicates that anyone who tries to amend Article 239 should be removed from office and disqualified from performing any public responsibilities for ten years. In 2009 when Zelaya tried to hold a referendum to amend the constitution the US (Hillary Clinton & the CIA's drug traficking network) supported a military coup removing him. Fast forward to 2017. Conservative President Juan Orlando Hernandez amended the constitution to let him run again without a referendum and the US supported it.

The people of Honduras don't like Juan Hernandez because he changed the constitution without a referendum. That's why they voted him out. It has nothing to do with being pro or anti America. In contrast we must ask is America pro or anti democracy? That is what's really on the table.