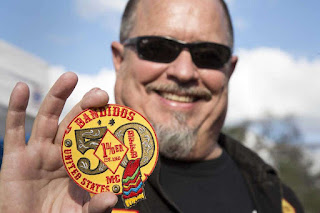 TBM Scandinavia is reporting that Former Bandidos National President Jeff Pike has been Indicted For RICO. The Youtube video contains screenshots of the indictment dated October 18th 2017. RICO stand for Racketeer Influenced and Corrupt Organizations Act which is somewhat ironic. Operation Fast and Furious revealed that ATF agents were selling the Mexican cartel guns and bringing back tons of cocaine as payment. Which leads us to ask which corrupt organization is which? The bikers being charged or the agents charging them?

It's pretty obvious that I oppose organized crime. However, it goes both ways. Banning gang colors in bars is fine but seizing their patch completely is off the hook. That is why I am concerned with and oppose the US Government's attempt to seize the Mongols patch.

The Aging Rebel is pretty much the go to guy for biker news in the US courts. Although he is pretty pro biker and anti ATF, he has experience in the US courts on biker rights and is quite knowledgeable on the subject. The government's obsession with the Bandidos seems to have peaked after the biker brawl in Waco Texas March 2015. Later we heard that 4 out of 9 Bikers shot dead in Wacko brawl were shot by police. The Aging Rebel has a lot to say about that topic.

One of the interesting concerns he expresses is the Prosecutor's obsession to ban the Bandidos lawyer Kent Schaffer from defending Jeff. That in itself is suspicious. The right to legal representation is entrenched in the US Constitution and in every free republic. So why do they want to break the Constitution to cram their case through? It is suspicious to say the least.