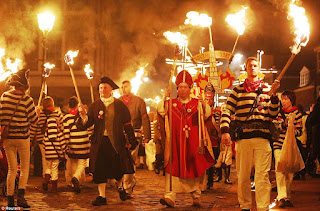 The original Guy Fawkes was caught trying to blow up the British parliament building in 1605. He was hanged for treason so every year they make an effigy of Guy Fawkes and burn him on Bonfire night. If you're in England you have to see Guy Fawkes night in Lewes. It is wild. When I was working in London over 25 years ago some friends took me down and I was astounded. You have to see it to believe it. Remember, remember the fifth of November.

The modern Guy Fawkes isn't quite the same villain the traditional one was. The modern Guy Fawkes is taken from the Movie V for Vendetta. That Guy Fawkes was a champion of justice against Corporate brainwashing. The group Anonymous organizes a million mask march in London on November 5th. Tragically Anarchist agent provocateurs are trying to destroy it.