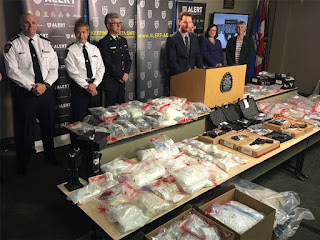 "The fentanyl seizure is the largest of its kind by ALERT, while the meth seizure nearly doubles the previous record for all of Alberta. Given the health crisis our communities have faced over opioid abuse, there is no doubt in my mind that lives have been saved." No kidding.

This is how you save lives and confront organized crime. By getting fentanyl off the streets. Not with Lethal Injection sites. Public opinion claims the Edmonton Police Service is compromised. That's why ALERT is the one confronting drug trafficking not the EPS.

Now the BC Gang task Force is compromised. They no longer target drug trafficking. They give the Hells Angels drug dealers police protection in the DTES and on the Surrey strip and pay millions of dollar to Hells Angels drug dealers and enforcers in exchange for letting them continue as long as they rat out a few small time rivals. In Alberta the gang task force is confronting organized crime. In BC they are promoting it.