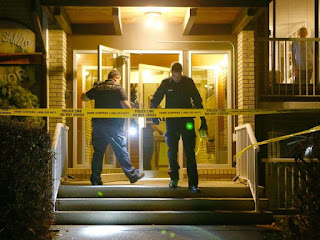 The Calgary Sun is reporting that "Police had their hands full Friday night and Saturday morning as they investigated two deaths in the city." Friday night's homicide was the result of a stabbing.

Global is reporting that on Saturday "the body of a man was found in a vehicle in the back alley in the 0-100-block of Ranchero Rise northwest, just after 4 p.m." I have the name of the victim but will not release it until the family has been notified. Local sources claim he was a member of the Independent Soldiers. Calgary police seem reluctant to name gang affiliations.

Last Saturday Mvemba Eriq Afonso was shot dead. CBC is reporting that "Two men are under arrest in Montreal for a murder (last) Saturday in southeast Calgary. Mourad Gasmi, 21, and Shannoh Jabet, 22, both of Calgary, have been arrested on warrants for the second-degree murder of Mvemba Eriq Alfonso. Alfonso, who also went by the last name Mvemba, was shot to death early Saturday morning in the southeast community of Dover. He was 23."

The Calgary Herald is reporting that Shannoh Jabet, one of the two suspects arrested for shooting Mvemba Eriq Afonso last Saturday, received a four-year sentence for his role in the 2014 death of Calgary man Devon Goot. Devon was beaten to death in a targeted attack which police state was over a long standing dispute.

Roland Chin, another Hells Angels associate from Calgary was shot dead in Abbotsford last July. Roland was with the FOB who were supplied by the IS in Calgary. I'm told the FK still exist in Calgary while the FOB and the IS are starting to dwindle.

Update: CBC is confirming the name of the victim is Olara Obina and is reporting that "The only thing bigger than his smile was his heart." Very sad.