The Devil's Deal for Hawthorne Park 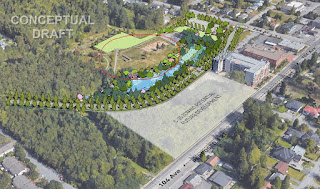 It appears that they are keeping the waterpark and playground. If that is the case, I'd be a lot more comfortable with the development proposal along 104th Avenue. However, a lot of people who live here aren't. They do not want a road with busy traffic running through the middle of the park. It's not just the structural folly of building a road through a bogg. People don't want to have to deal with car and truck exhaust while they are watching their kids having a barbeque. I share those concerns.

In addition to that condos built on park land would increase traffic. Reverting 104th Ave to a single lane of traffic each way to make room for an LRT would be insane. A new side street along 105 could not possibly fix the resulting traffic chaos.

With regards to the proposed development within the park, flipping protected park land into high density residential would be a huge money maker for developers bidding on the project. Instead of giving it away at firesale prices to their campaign contributors, the City could sell it at fair market value and help offset the colossal debt Dianne Watts left us with. We need to start being fiscally responsible and avoid another insider trading fiasco like like they did in Campbell Heights. 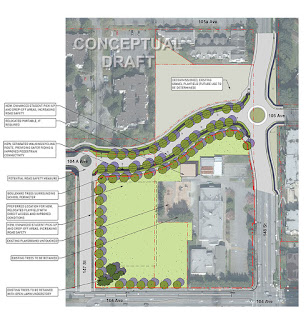 As for the road through Hjorth Road elementary school, when you go to the site the proposal looks insane. The road cuts the school off from it's playing field. However, the picture of the proposal allows for a new playing field adjacent to the other side of the school. That could work. The only problem would be the two existing businesses on 104th. Lee Yuen Seafood Restaurant has been there forever. They'd have to be voluntarily paid fair market value for their business. However, letting them stay and build the new playing field around their business would also work.

My main concern remains to be an on ground train along 104th avenue reverting 104th to a single lane of traffic in either direction. That will not work. On ground trains are good for commuting in rural areas. On ground trains in the middle of an urban core are problematic.

Wikipedia is reporting that "Kevin Desmond, CEO of TransLink, has indicated that there Skytrain along the second phase of the project (Fraser Highway Line) it is also a possibility instead of LRT, however a statement from the Surrey Mayor has confirmed that a Skytrain solution along Fraser Highway would cost $950M more than LRT" which is a bold faced lie. Linda Hepner is the problem here. Remove her.

No one who lives in Guildford wants an on ground train running along 104th Avenue from Guildford Mall to Surrey Place reverting 104th avenue into a single lane of traffic each way. That is insane. People who own cars prefer Skytrain because it doesn't impede traffic. People who own cars should have a say because they pay Translink a billion dollars a year in a regional gas tax above and beyond federal and provincial gas tax.

Linda Hepner wants to give the contract for the LRT disaster in Surrey to SNC Lavalin, the most corrupt construction company on the planet. SNC Lavalin has a history of under bidding to get government contracts then over charging once they have the contract just like Lockheed Martin. SNC’s fraud, corruption hearing set for 2018. That's why Linda Hepner is trying to start construction of the LRT nightmare before that trial gets going. SNC-Lavalin work for TransLink. They also build LRT.

It has absolutely nothing to do with saving money. It's all about burning tax dollars and giving kickbacks to the political parties for the favor. SNC-Lavalin violated election rules with campaign donations. SNC-Lavalin illegally donated over $117K to federal parties. Liberals, Conservatives reimburse illegal SNC-Lavalin donations. Massey Bridge: A Boondoggle Bought by Big Money.

Posted by Dennis Watson at 1:25 AM