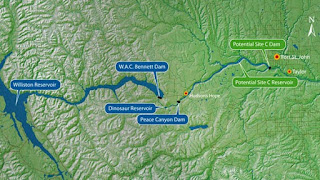 Gordon Clark from the Vancouver Province put out a redeeming editorial about B.C. Green party leader Andrew Weaver's position on the Site C Dam. In the editorial he states: "I asked why the Greens were so opposed to what is one of the greenest power-generation projects imaginable and something he had previously supported."

"He agreed that B.C.’s low carbon footprint, by First World standards, is largely due to the hydroelectric dams built in the past, but for him the issue comes down to cost. He is less concerned about issues raised by other environmentalists in and outside his party, such as the flooding of the valley, loss of farmland and native concerns. Weaver said he supported Site C when it was expected to cost $4.5 billion, but not now that estimates have soared to $12 billion or higher." Hydro electric power is green. It's a lot better than nuclear reactors.

As for the massive over budget costs, that can be easily explained by the involvement of one of the world's largest criminal organizations, SNC-Lavalin. Weaver supported the Dam when it costs $4.5 billion, but now that costs have skyrocketed to over $12 billion he no longer supports the proposal. That is a colossal project over run. That is the method of operation of SNC-Lavalin and Lockheed Martin. They under bid and overcharge contracts. No one complains because they give the politicians kickbacks and campaign contributions which perpetuates the tax fraud forever.

Trump slams Lockheed Martin over F-35 Cost overruns. "Based on the tremendous cost and cost overruns of the Lockheed Martin F-35, I have asked Boeing to price-out a comparable F-18 Super Hornet!" Now that's what I'm talking about.

Thanks to Gwen Morgan, the corruption ridden SNC-Lavalin now works for Translink. The Evergreen line has consequently met with budget over runs. Imagine that. The problem is, SNC-Lavalin also builds light rail. Giving SNC-Lavalin the contract for the LRT on 104th Avenue that no one here wants, would be an act of treason. Even Rail for the Valley would oppose that.

Dianne Watts ran for the federal Conservatives. SNC-Lavalin gave massive political donations to the Conservatives and the Liberals both. Dianne Watts is pushing the Surrey LRT insanity down 104th. Do the math. More tax fraud just like Campbell Heights.

Posted by Dennis Watson at 4:05 AM