Another double shooting in Kamloops 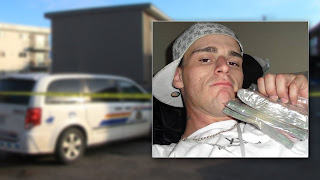 CBC is reporting that "Two people have been hospitalized after a reported shooting in the Brocklehurst neighbourhood of Kamloops, B.C. B.C. Emergency Health Services spokesperson Shannon Miller said paramedics received a call about a shooting just before 4 p.m. PT on Friday. According to Miller, paramedics transported one person in serious condition and one person in critical condition to hospital."

Kamloops this Week is reporting that "Police said on the weekend that, given the string of violent incidents in Kamloops in recent weeks — including the shooting deaths of two men in January, a kidnapping and robbery on Feb. 13 and the shooting of a man and woman on Feb. 15 — Ferrier’s reported disappearance had them concerned."

Earlier this month CFJC Today reported that 31 year old Blake Bernhard was arrested a few blocks away from the scene of yet another shooting, and is currently facing charges related to the breach of previous gun-related conditions.

Last month there were Two fatal shootings in Kamloops.