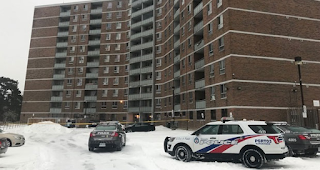 Global is reporting that "Toronto police say homicide investigators have taken over after a man was shot and killed in east-end Toronto on Tuesday. Emergency services responded to reports of gunshots in the Lawrence Avenue and Andover Crescent area just before 3 p.m. Police said officers found a man on scene suffering from gunshot wounds. He was rushed to hospital without vital signs. Police said he later succumbed to his injuries. Officers said a man was seen fleeing the scene northbound wearing a black toque, black jacket, black track pants with a white stripe, boots and a backpack. Police said he is believed to be armed."

CP 24 is reporting that "A man has been taken from the scene of a Mississauga shooting to a trauma centre with life-threatening injuries on Tuesday night. The incident took place in the area of Mavis Road and Crawford Mill Avenue just after 10 p.m. Peel Regional Police said the victim is in critical but stable condition."

Global is reporting that "Toronto police are investigating after numerous shots were fired outside a plaza in north Etobicoke. Police responded to a call around 10:30 p.m. Sunday in the area of Islington Avenue and Dixon Road. Authorities said two people were taken to hospital with minor injuries. Several cars and at least one store window were damaged."

Global is reporting that "Toronto police say one woman is suffering life-threatening injuries after an early morning shooting in Etobicoke on Sunday. Officers responded to a call at 6:50 a.m. in the area of Lake Shore Boulevard and Silver Moon Drive, just west of Park Lawn Road. Investigators said a woman was found without any vital signs when police arrived on the scene. She was rushed to hospital for treatment."

Last month an 18-year-old man was fatally shot in Etobicoke.