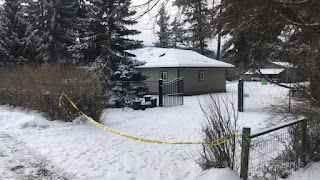 The Salmon Arm Observer is reporting that "A man is in custody after a suspected shooting that left one dead Friday morning. Vernon-North Okanagan RCMP are currently investigating multiple scenes resulting from what police believe to be a break and enter that turned violent."

"The Vernon-North Okanagan RCMP received a report of a break and enter in progress at a residential home located in the 9800-block of Park Lane, Lavington at about 1 a.m. Friday, Feb. 8. It was reported there were possible shots fired resulting in one occupant of the home sustaining non-life threatening injuries."

"Approximately a half hour after the break and enter incident, RCMP officers were called to an address located in the 4800-block of 27th St, Vernon in regards to one male who was has sustained an apparent gunshot injury. This man has since died as a result of these injuries."

Global is reporting that "After the Lavington incident, police showed up in the parking lot of the Village Green Hotel, where a minivan is under an RCMP tent. RCMP say they found a male who had died from an apparent gunshot wound in the parking lot. Whether or not the individual was shot in the van is still not clear, but it should be noted there are blood stains on the ground, just outside the front passenger door." The van was in the Village Green Hotel parking lot. 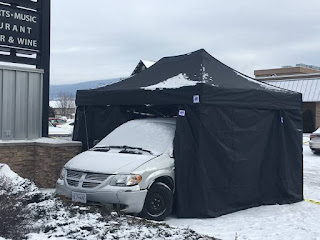