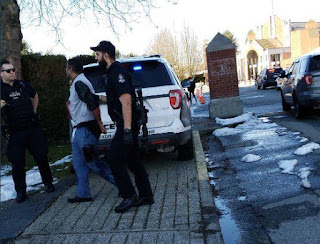 CBC is reporting that "A woman and an off-duty police officer have been taken to hospital in "serious to critical" condition after they were stabbed in front of an elementary school in Delta, B.C. Wednesday afternoon. In a statement, Delta police said an altercation broke out between a man and a woman in front of Immaculate Conception Elementary School at about 3:05 p.m.

Police say an off-duty officer intervened and was stabbed in the scuffle, along with the woman. B.C. Emergency Health Services says two patients were taken to hospital in "serious to critical condition. Police have a suspect in custody but say the scene remains active. No children are believed to have been harmed, police said."

Outside an elementary school. You are a f*cking idiot.

Update: CBC is reporting that "49-year-old Manoj George of Delta, is charged with two counts of aggravated assault and two counts of assault with a weapon."