Lady Gaga and Bradley Cooper at the Oscars 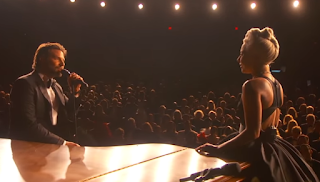 I'm going to comment on Lady Gaga and Bradley Cooper's stunning performance at the Oscars which everyone is talking about. The performance of the song Shallow was flawless but that's not what everyone's talking about. Everyone is saying they're sleeping together. I would just like to clarify that you all are completely missing the point. Both of them.

After 2:00 in the video Lady Gaga nails is. It doesn't matter what color her hair is. It doesn't matter whether or not she is wearing any make up. (In the movie she was brunette without makeup and very exposed then was a redhead towards the end) It doesn't even matter what crazy outfit, hat or mask she is wearing to get someone to finally listen to her. Close your eyes and listen to her sing that line. She nailed it. She showed her magnificent ability to sing. That's where ya'll are supposed to cheer and applaud. If you listen carefully this is where a blind man sees.

Bradley Cooper's ex wife has taken some heat for a comment she made about it. A comedian posted on Twitter Is there any chance these two aren't f*cking? And she replied Ha. Now fair enough that was somewhat ambiguous. She could have been denying the accusation for all we know. Nevertheless in her Instagram rant she made a false statement. She said her book wasn't about her ex and didn't even mention him. It was about her gluten intolerance. That is simply untrue. Her book did mention her ex and did trash him an a very childish and petty manner.

My concern wasn't what Jennifer Esposito said on twitter. My concern is what she said in her "memoir" about him. “I should have noticed the red flags from the beginning—actually, they were more like an entire marching band squad of red flags — but I ignored them because, honestly, I didn’t think the relationship was really going to go anywhere,” she wrote. “He was funny, smart, cocky, arrogant, and a master manipulator. I didn’t necessarily find him that attractive, but I figured that I could enjoy his sense of humor and nonsense for a while.”

That's not a marriage, that's fling. Saying that in a book after the fact is petty and cheap. She's trying to trash him and make herself look good but she did the opposite. She looks very self indulged. It was a good thing he didn't have any kids with her.

In contrast, Bradley Cooper's current girlfriend, Russian supermodel Irina Shayk, the mother of his child, is a wonderful person comfortable in her own skin. She hugged Lady Gaga after the performance and sat between them at the venue. 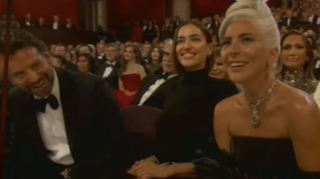 Now I'm going to talk about leaving the shallow. The mob is fickle and Hollywood is shallow. As always, we should aspire to something higher. The movie A Star is Born is no Mr & Mrs Smith. It has profound depth. As I said before it will rip your heart out.

Bradley Cooper directed and costarred in the movie. He was one of the writers. He didn't portray himself as some studly action hero in the script. He portrayed himself as an alcoholic struggling with that disease. The movie wasn't about a steamy affair. It was about a woman who was married to an alcoholic and the challenges they faced.

In the movie Ally is on stage accepting a Grammy, while her husband Jack stagers up on stage drunk and pisses himself in front of everyone. It was mortifying. He had to stay drunk so he didn't have to deal with the embarrassment. When he got sober dealing with the embarrassment was too much to bear. This movie is far from the shallow. It has profound depth. It forces us to think about how addiction adversely affects all of us. It is a sobering thought indeed. Well done. 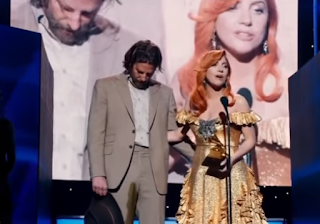 Perhaps Lady Gaga is feeling a little like Alanis Morissette right now. Perhaps not. As Bradley Cooper explained, that's how love songs are supposed to make you feel. The indisputable fact is that her acting debut was a flawless victory. Let her shine and give credit where credit is due.

The Washington Post is reporting that "Grab a tissue and say it with us: Lady Gaga and Bradley Cooper are not in love. The singer, toting her Oscar in a bag (seriously) appeared on Wednesday’s “Jimmy Kimmel Live,” where she addressed the hubbub: No, she and Cooper are not running off into the sunset together. They are two actors who were acting while singing a love song from a movie at an awards ceremony celebrating actors at the top of their craft (emphasis mostly ours). Here’s how Gaga put it:

“First of all, like, social media quite frankly is the toilet of the Internet and what it has done to pop culture is just abysmal,” she told Kimmel. “And yes, people saw love and, guess what, that’s we wanted you to see. This is a love song, ‘Shallow.’ The movie, ‘A Star Is Born’ is a love story.” “Are you having an affair with Tony Bennett?” Kimmel joked. Gaga gave a coy glance before breaking into a laugh. “No!” she said. “No, I’m an artist and I guess we did a good job. Fooled ya!” 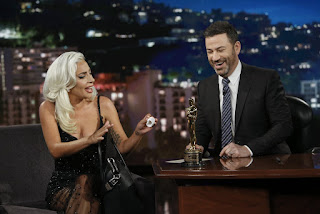 Brie Larson and Samuel L Jackson Parody of the performance 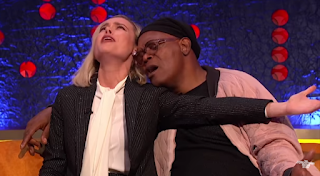