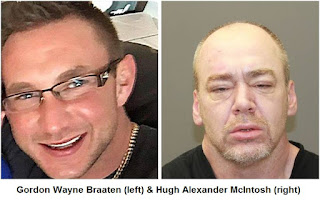 Tim Petruk is reporting that "Two alleged Kamloops gangsters were charged Wednesday with murder and attempted murder in connection with a deadly shooting last week in Brocklehurst - the latest in a string of violent incidents linked to a power vacuum at the top of the city’s drug trade. Gordie Wayne Braaten and Hugh Alexander McIntosh are each facing charges of first-degree murder and attempted murder after a shooting last Friday that killed 39-year-old Jason Glover and injured 50-year-old Kelly Callfas."

"As of noon Wednesday, Braaten and McIntosh remain at large."