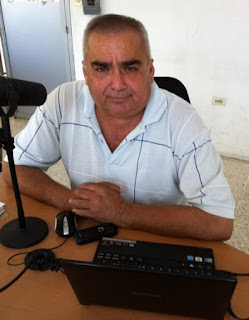 CNN is reporting that "Jesus Eugenio Ramos Rodriguez was at breakfast Saturday morning when he became the second journalist murdered in Mexico this year. Mexican authorities confirmed the death of Rodriguez on Saturday. They say he was in a restaurant early Saturday morning in the city of Tabasco when he was shot and killed. Rodriguez hosted a radio show that aired twice daily, and according to government run Notimex, he is the second journalist to be killed in Mexico in 2019."

"With nine journalists killed in 2018, Mexico is the fourth deadliest country in the world for journalists, according to a report by Reporters Without Borders, known internationally as Reporters Sans Frontières (RSF). The United States, last year, tied for fifth."

One year after the murder of Juan Carlos Huerta, the voice of Jesus Ramos is silenced. Our heart goes out to his family, followers and all the people of Mexico struggling under the burden of organized crime. We also remember Felina, aka Catwoman the courageous blogger who was killed by the cartel. We spotlight the missing in Mexico in honour of her memory.

Let us remember that the CIA is the one feeding the violence in Mexico. They were the ones responsible for operation Fast and Furious that sold guns to the sinola cartel and brought back tons of cocaine as payment. Some of that cocaine made it's way into Canada thanks to the CIA which is as we originally declared a criminal organization far more ruthless than the Hells Angels.

Fear God and respect the dead. We all will be held accountable for our actions in this life.

Posted by Dennis Watson at 9:43 AM